When Namrata Shirodkar's Son Gautham Played A Game That Started As Dumb Charades And Ended As...

"What started off as dumb charades for Gautham Ghattamaneni almost ended up like read my lips," wrote Namrata 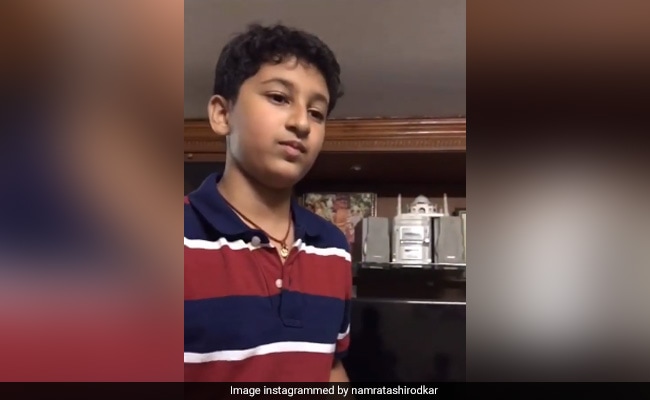 Gautham, in the video shared by Namrata Shirodkar. (courtesy namratashirodkar)

Namrata Shirodkar never fails to drive our lockdown blues away with adorable throwback memories featuring her family - husband Mahesh Babu, son Gautham and daughter Sitara. Namrata, on Thursday, dropped another cute snippet of Gautham playing dumb charades and it is just too cute. Adding to her series "memory therapy," Namrata shared a video where Gautham can be seen trying to explain a word by acting it out. In the later part of the video, when Gautham fails to make his teammates understand, he can be seen mouthing the words. LOL. Namrata shared the adorable video and wrote, "At 6 years or so. What started off as dumb charades for Gautham Ghattamaneni almost ended up like read my lips... outcome unknown. One for each day." She also added the hashtag "memory therapy" to her post. Take a look:

what started off as dumb charades for GG almost ends up like a 'read my lips'... outcome unknown #memorytherapy one for each day @gautamghattamaneni

A few days ago, Namrata shared an adorable snippet of herself cycling on the roads of Baden-Baden, Germany, with Gautham and Sitara. "The fall season in Brenners (Germany). Cycling with my babies. Nothing like it. Sitara Ghattamaneni, you better speed up next time," Namrata captioned the video. Take a look:

The fall season in Brenners (Germany)Cycling with my babies Nothing like it@sitaraghattamaneni you better speed up next time! #badenbadendays #memorytherapy One for each day @gautamghattamaneni

Namrata keeps treating her Instafam to super adorable throwback pictures. Namrata shared this picture of Gautham posing with a pint-sized Sitara. "Fill your life with experiences, not things. Have stories to tell, not stuff to show. My two lifelines," wrote Namrata.

Fill your life with experiences, not things. Have stories to tell, not stuff to show my two lifelines #grateful for this lifetime #MemoryTherapy one for each day #stayhomestaysafe @sitaraghattamaneni @gautamghattamaneni

Namrata Shirodkar, who was crowned the Femina Miss India in 1993, met Mahesh Babu on the sets of the film Vamsi in 2005. They got married in the same year. They welcomed their son Gautham in 2006 and daughter Sitara in 2012.

Mahesh Babu is best-known for his performances in films such as Okkadu, Nijam, Bharat Ane Nenu, Srimanthudu and Aagadu. He was last seen in the 2020 action-comedy Sarileru Neekevvaru where he shared screen space with Rashmika Mandanna, Vijayashanti, Prakash Raj, Rajendra Prasad, Murali Sharma and Rao Ramesh among others.