When In Switzerland: Mohit Sehgal And Sanaya Irani Tried (And Hilariously Failed) To Recreate DDLJ Scene

Sanaya Irani and Mohit Sehgal are currently holidaying in Switzerland 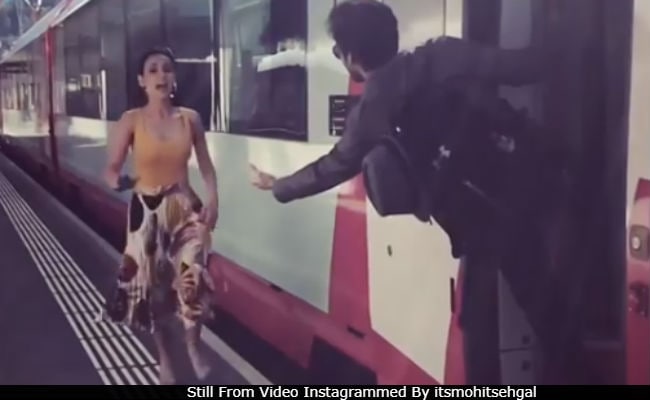 Television stars Sanaya Irani and Mohit Sehgal, who are currently holidaying in Switzerland, are treating their fans to some wonderful pictures from their trip. This morning, they made another entry to their Switzerland diaries, in which the duo 'tried to' recreate the iconic train scene from Shah Rukh Khan and Kajol's Dilwale Dulhania Le Jayenge. But the end turned out to be exactly the opposite, something Mohit must have not expected. In the video, we can see Mohit on a train while Sanaya runs towards him, just like it happened between Shah Rukh Khan and Kajol in Dilwale Dulhania Le Jayenge. However, rather than holding Mohit's hand, she ignored him and raced past him (LOL!).

"Was trying to recreate DDLJ scene with Sanaya Irani but...," Mohit captioned the video, adding hashtags like 'DDLJ Moment' and 'Swiss Trains.'

Sanaya and Mohit's vacation looks no less than a scene from some Bollywood film and the picturesque location adds more to it. Just last evening, Mohit shared a loved-up picture and wrote, "My happiness lies in your lap because it makes me forget all my worries." Pictures from their Switzerland vacation are trending on and off.

My happiness lies in your lap b'cas it makes me forget all my worries . Thank you soooo much @ritusharma2015 for clicking this picture

Who else wants to shut off their phone, #bike to a lake, forget everything and just listen to the sound of water #bliss #inlovewithswitzerland #interlaken @myswitzerlandin

The couple also went for paragliding.

Sanaya Irani and Mohit Sehgal fell in love on the sets of their 2008 show Miley Jab Hum Tum. They married in January 2016.