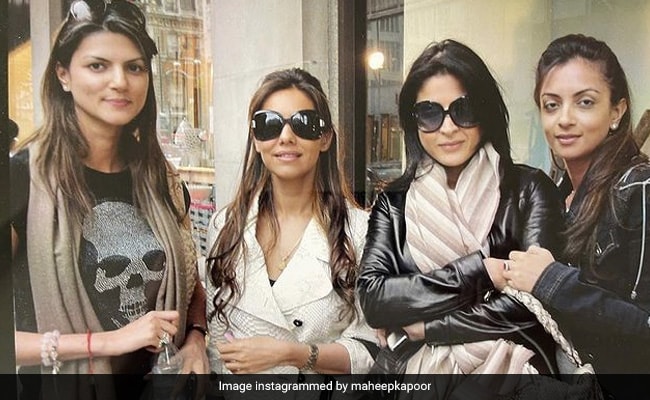 Our Saturday couldn't get any better as we chanced upon a throwback picture of Gauri Khan and her BFFs Maheep Kapoor, Seema Khan from their trip to London. The old photo was shared by Maheep Kapoor on her Instagram profile. In the throwback photo, Gauri Khan can be seen sporting a white jacket and blue jeans. She completed her look with a pair of sunglasses. Maheep Kapoor and Seema Khan can be seen twinning in black jackets. The picture also features designer Nandita Mahtani. Sharing the photo, Maheep Kapoor wrote: "Miss London in the summer #WhiteWineInTheSun #PubLife #bestwithmyfriends #TB." Take a look:

Maheep Kapoor often shares priceless throwback pictures of herself. Recently, she posted a bunch of pictures from her school days and wrote: "School pictures! Can you spot me?"

Seen Maheep Kapoor's "throwback to when she went for a KKR match" with her girl gang yet? If not, check it out here:

In terms of work, Maheep and Seema Khan co-starred in The Fabulous Lives Of Bollywood Wives. It is a Netflix series based on the lives of four star-wives - Seema Khan (married to Sohail Khan), Maheep Kapoor (Sanjay Kapoor's wife), Bhavana Pandey (wife of Chunky Pandey) and Neelam Kothari (married to Samir Soni). The show has been produced by filmmaker Karan Johar. The second season of the show will premiere soon on Netflix.

Amitabh Bachchan Would Love To Go Back In Time. This Throwback Post Is Proof