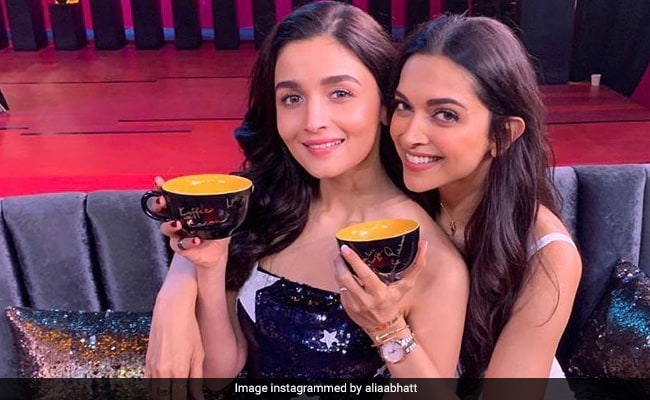 Deepika Padukone channelled her inner prankster during a recent interview with Film Companion, where she was joined by stars like Ranveer Singh, Alia Bhatt, Ayushmann Khurrana, Vijay Deverakonda, Manoj Bajpayee, Tamil star Vijay Sethupathi and Malayalam actor Parvathy Thiruvothu. Here's what happened - During a segment of the show, Arjun Reddy Star Vijay Deverakonda revealed that he had a crush on Deepika Padukone and Alia Bhatt for the longest time. He said, "Without shame, a lot of people on this table have been massive crushes, like been in love with some of them, like these two (he said, pointing towards Deepika and Alia). Deepika got married but..." The "Padmaavat" actress quickly interrupted and said, "Alia is getting married." Reacting to Deepika's statement, Alia said, "Excuse me! Why have you made this declaration?" Later, Deepika clarified that she "made that up" in order to see Vijay Deverakonda's reaction. "Guys, I made that up. I just wanted to see his reaction," said Deepika.

Check out the video from the discussion, where the actors talked about the 100 greatest performances of the decade.

Alia Bhatt and Ranbir Kapoor frequently feature in headlines, courtesy their wedding reports. Rumours about their romance began after the Brahmastra co-stars made an appearance together at Sonam Kapoor and Anand Ahuja's wedding reception in Mumbai last year. Alia even accompanied Ranbir to New York in December last year, where the actor's father Rishi Kapoor was undergoing medical treatment for cancer. The couple are frequently spotted making appearances together at public events and otherwise.