"Me and my family with Salman Khan bhai on sets of 10 Ka Dum," read a tweet 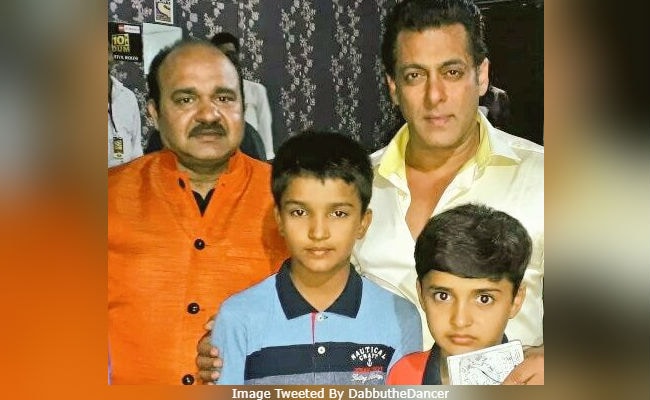 New Delhi: Sanjeev Shrivastava, better known as the 'dancing uncle,' appears to have recently met superstar Salman Khan on the sets of TV show 10 Ka Dum 3. A tweet from an unverified Twitter account, purporting to be Mr Shrivastava's reads as, "Me and my family with Salman Khan bhai on sets of 10 Ka Dum" and a couple of pictures were also posted. 10 Ka Dum 3 went on air earlier this week and is hosted by Salman. Meanwhile, Sanjeev Shrivastava, 46, from Madhya Pradesh's Vidisha became an overnight Internet sensation after his dance from a family wedding went viral. He danced to Aap Ke Aa Jane Se from Govinda's 1987 film Khudgarz and in just no time, the video started trending.

Take a look at Sanjeev Shrivastava's pictures with Salman.

Me & My Family with @BeingSalmanKhan Bhai on sets of @duskadum2018@SonyTV#DancingUncle#SalmanKhan#SanjeevShrivastava#SanjeevSrivastva#Aapkeaajanese#India#GovindaUncle#Bollywoodpic.twitter.com/Ep3pIus6cl

After the video went viral, Govinda said that Mr Shrivastava's dance is 'mind-blowing.' In an interview to mid-day, Govinda said, "I love his moves. Sanjeevji's dance is mind-blowing and out of the world. I hope we see more of him in the future."


Promoted
Listen to the latest songs, only on JioSaavn.com
"Sanjeevji is dancing with abandon and is clearly having fun. That's the key to dancing. His joy reflects in his moves. These tributes are the best part of my career. I cherish them like awards," Govinda added. Several celebs like Arjun Kapoor, Raveena Tandon, Divya Dutta and others had also tweeted about him.

Of the sudden fame Sanjeev Shrivastava told NDTV, "This is an unreal feeling. I can't believe my dance video has gone viral. I thank everyone for the love and support. I have been dancing since 1982 and my idol is Govindaji. Now I hope to get more opportunities."