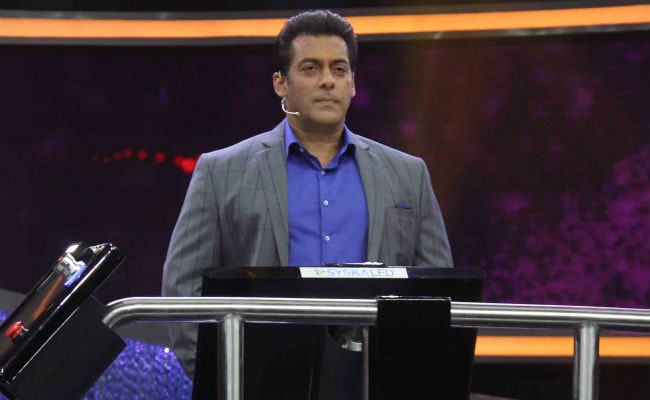 Mumbai: A lot of journalists look forward to a press conference with superstar Salman Khan because of his unusual style of answering questions and entertaining the media. For him, it's always important to entertain the entire room with his humour and jokes. Maybe that's the reason reporters always asking him questions about his marriage or something that will prompt him to give funny answers. Here are seven entertaining questions and answers from the press conference of 10 Ka Dum 3.

Q: I will ask you a question in your 10 Ka Dum style, what would be the percentage of Indians who would want you to get married?

Salman Khan: Wow! I think if I get a window of 50% that's what I feel the answer will be to this question but I would want it to be up to 10% only. I know why you'll keep asking this question about my marriage. Hoping someday I will say yes.

Q: Why do a lot of big-screen actors look down on TV?

Salman Khan: They think 'we came to do films and if we do TV, we will lose respect and fans will look down upon us.' They would rather not work than make lakhs of rupees on TV that they will never make in films.

Q: What percentage of people feel that 10 Ka Dum will be a bigger hit than Bigg Boss?

Salman Khan: I hope they both keep on beating each other. Right now, I hope 10 Ka Dum beats Bigg Boss and then Bigg Boss again beats 10 Ka Dum and so on and so forth.

Q: You had a court case going on, you were shooting your film simultaneously and attending events. What keeps you going?

Salman Khan: Everyday that I work, those many salaries are going to those many people. I rather work than go on a foreign holiday. My life has been a holiday. I like what I do. See the number of unit members here, it's about 120. A film set has about 500 people working all the time, they also get paid. Then advertisers make money. If my hairstyle from a film catches on, then barbers get work. If clothes pick up, then that also is another business. So all that I do generates employment and business so I want to keep working.

Q: Race 3 has been trolled a lot on the social media...

Salman Khan: Are you trolling it? Or do you know someone who is trolling? Those guys with one or two followers, is that trolling? It's not trolling when one or two guys write something.

Q: Which is that one question that you want people to stop asking you?

Salman Khan: This question! That what is that one question that people should not ask you.

Promoted
Listen to the latest songs, only on JioSaavn.com
Q: Which other actor do you think would do a good job with hosting 10 Ka Dum?