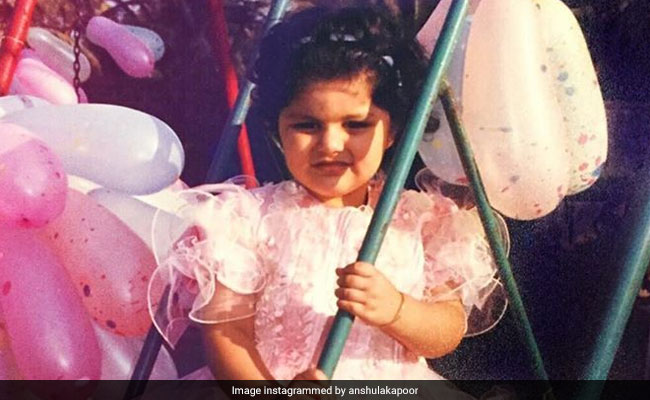 Anshula Kapoor's latest Instagram entry proves why we love throwback pictures. There might be time for 'Throwback Thursday' but Anshula's post gave us the feels. Anshula posted a picture of herself from her childhood days and we must tell you that she looks absolutely adorable. In the picture, Anshula can be seen wearing a pink dress. The picture happens to be from one of Anshula's birthdays (which one, she didn't say). In her caption, she compared her look to that of a "two-tiered cake." She captioned the post: "You know your love for cake is paramount when you dress up to look like a 2 tiered cake at your own birthday." She added the hashtags #WayBackWednesday #JuniorKapoor #90sFashion #GottaLoveCake.

Anshula Kapoor has a treasure trove of throwback pictures and her brother Arjun Kapoor frequently makes appearances in them. Remember the throwback picture from her childhood days that Anshula shared last month, which also featured her cousins Rhea Kapoor and Mohit Marwah? She captioned the post: "This is still my expression when Arjun Kapoor tells me I should drive hahahaha! Gotta love the Nineties when we were all basically a cute mess."

This is still my expression when @arjunkapoor tells me I should drive hahahaha! Gotta love the 90s when we were all basically a cute messss! #90sKids #ThisIsProofThatIveNeverWantedToDrive

How can we forget the post which proved that Arjun Kapoor's "shoe game was on point" even in the Nineties?

I don't really understand what this pose is, but I do know that there's no one else I would rather be my weird self with (Also please note how your shoe game is on point even in the '90s @arjunKapoor ) #Number1SinceDay1 #BirthdayWeek #SidelockGameOnPoint #WhyAmIWearingWinterClothesInBombay #LetsRebelAndThrowbackOnAMonday

Anshula Kapoor is the daughter of film producer Boney Kapoor with his first wife Mona Shourie.