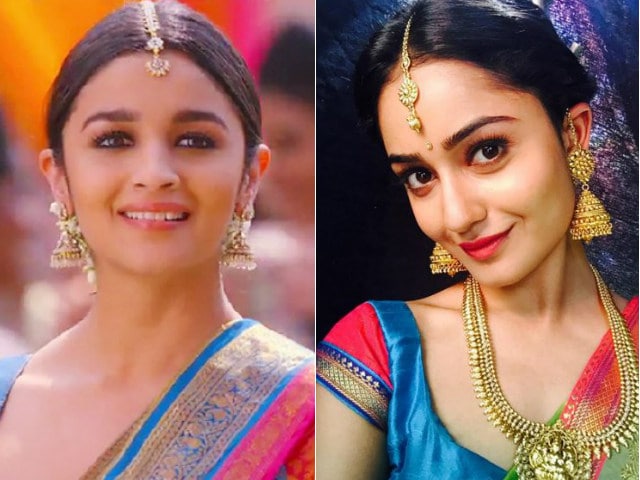 A still from 2 States (left) and the image to the right was posted on Instagram by tridhac.

Mumbai: Tridha Choudhury is elated to be compared to Bollywood actress Alia Bhatt for one of her looks in her TV show Dahleez.

Tridha, who forayed into the small screen with the Star Plus show, had to wear a Kanjeevaram sari similar to the one Alia wore in 2 States for a sequence.

"I'm playing the character of a Tamil Brahmin girl in the show and for a wedding ceremony of a friend in the show, I did wear a beautiful sari. Coincidentally, it was like Alia's look of 2 States and everyone on the set complimented me, saying I look like her," Tridha said in statement. (Also Read: Alia Bhatt's Elan: There's No Diplomacy Like Fashion Diplomacy)

In the show, she is seen as the female protagonist Swadheenta Ramakrishnan opposite Harshad Arora.

The actress, who has appeared in various Bengali and Telugu films, added: "It was such a pleasant change from the kind of scenes we have shot till now. My look is also very different. I am sure audience will love it."

Set in Delhi, Dahleez is the story of two individuals - Swadheenta, a young aspiring lawyer and Adarsh, an IAS officer. Both have their respective sets of values and ideals which set them apart from the crowd.

Meanwhile, Harshad is also recuperating as he hurt his back while doing an action sequence for Dahleez. In one scene, he had to hit goons and they retaliated. He actually got hit but continued to shoot in immense pain, and rested afterward.

Money Heist 5: A Quick Recap Before You Watch New Season