Amitabh Bachchan revealed the throwback memory is from Tashkent, when Abhishek "signed his first autograph." 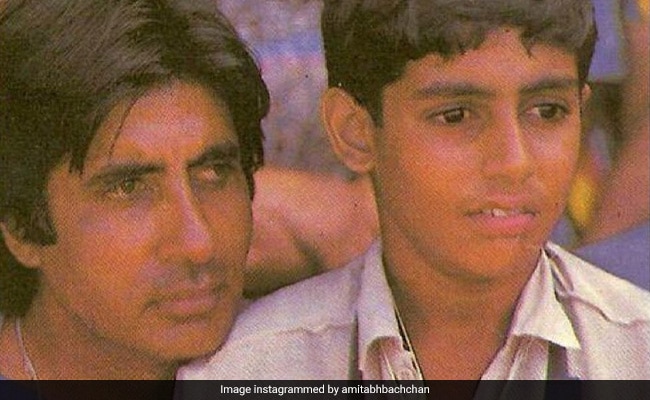 Big B and Abhishek in a throwback photo (Courtesy amitabhbachchan)

If there's something like a Wayback Wednesday, Amitabh Bachchan knows just how to set the mood for it. The 78-year-old megastar, who has an impressive collection of throwback memories, was kind enough to share one such with his Instagram family and it's a true blue blast from the past. The photo seems to be sometime from the 1990s - the caption in Big B's post appears to be a typo. Mr Bachchan revealed the throwback memory is from Tashkent, when Abhishek "signed his first autograph." In the photo, a teenaged Abhishek Bachchan, with a quizzical expression on his face, can be seen posing with his father.

Here's what Big B dug out from his throwback archives.

Amitabh Bachchan, 78, is still one of Bollywood's biggest stars and has an impressive line-up of films ahead. He was last seen in Gulabo Sitabo. His line-up of movies includes films such as Chehre, Brahmastra and Jhund. Big B will also be directed by Ajay Devgn for an upcoming movie titled Mayday, which is believed to be a compelling thriller.

Abhishek Bachchan was last seen in the film Ludo, which premiered on OTT platform Netflix. Abhishek Bachchan's list of upcoming movies also include The Big Bull and Bob Biswas.