"What's Going On?": Genelia D'Souza's State Of Mind In "Tough Times" Explained In A Song

The actress shared a video in which she is lip-syncing to a song by the rock band, 4 Non Blondes 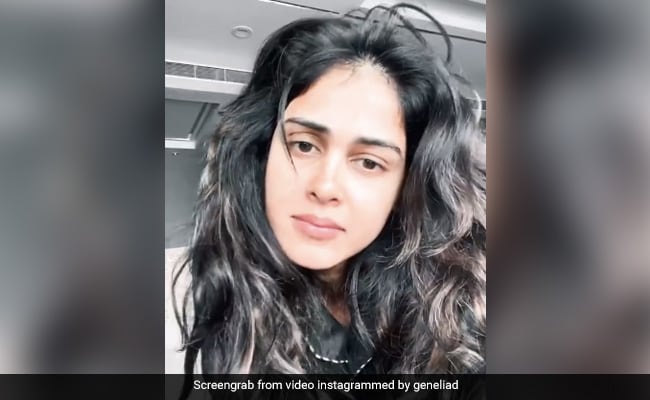 Genelia D'Souza in a still from Instagram video (courtesy geneliad)

Ever since the outbreak of the COVID-19 pandemic early last year, life as we have known it has changed. With many of us stuck at home for the large part of last year as well as this year, things can get quite frustrating and that is okay. This is exactly what Genelia D'Souza showed us in her new video. The queen of Instagram Reels shared a clip in which she looks seemingly frustrated by the things happening around us. Dressed in a black nightshirt, the actress is lipsyncing and headbanging to the song What's Going On by the rock band, 4 Non Blondes.

Sharing the video, she wrote in the caption, "Tough times…And constant questions of, 'What's going on'. But this shall pass too, we will fight it." Along with the caption, she also reminded her fans and followers to "mask up" and "stay safe" in her hashtags. Fans of the actress loved the video and left hearts in the comment section.

The actress often shares fun and relatable Reels and photos on her Instagram feed that are a huge hit with fans. As a mother of two, Genelia also often interacts with her followers about motherhood and her experience. In the context of COVID-19, the actress spoke about how having children around helped her remain positive. Sharing a video where she is seen playing with her kids, she wrote, "Nothing in life will ever make you feel as happy, as sad, as exhausted but most importantly as incredibly proud as motherhood. Covid has been tough but kids just make you believe there's magic because they search for it."

Genelia's husband, actor Riteish Deshmukh also appears on some of her videos. Take, for instance, this video the couple shot in between work. In the clip, Riteish and Genelia are seen getting their makeup done with Riteish lipsyncing to the song Kya Khoob Lagti Ho as the actress blushes. Sharing it, she wrote, "Tough times shouldn't dampen the spirit... If this year has taught us anything- it's all about spending time with your loved ones and finding ways to make it special."

Genelia is known for her work in films such as Bommarillu, Boys, Santosh Subramaniam and Jaane Tu Ya Jaane Na. Genelia and Riteish starred together in movies such as Masti and Tere Naal Love Hogaya before tying the knot in 2012.