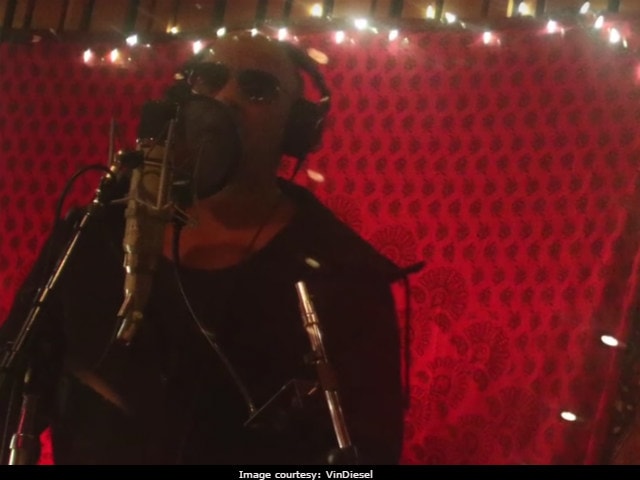 Vin Diesel in a still from the video shared on Facebook

New Delhi: You must have heard about a popular phrase "Jack of all trades, master of none," but Vin Diesel is surely an exception. From ruling in the wrestling world to making it big in Hollywood and now breaking the internet with his singing skills, Vin Diesel knows it all. Vin Diesel recently posted a video on his Facebook page hinting that he has collaborated with his "favourite" DJ Kygo. He will be singing in a reprised version of Kygo's recently-released track, which is apparently with Selena Gomez. The Furious: 7 actor can be heard singing and accompanying Selena and Norwegian DJ Kygo studio in the video, which is acptioned "All Love".


A day after posting the teaser video, Vin Diesel tweeted "You are going to be as shocked as I am... Kygo the magician just took my voice and added it to his new track. Speechless," The actor continued thanking the team and praising Selena: "Thank you Kygo for making magic, Selena's voice is beautiful and welcoming. Dream come true!!," he tweeted the next day.

Go to my Facebook page... wait for it... again thank you Kygo for making magic. Selena's voice is beautiful and welcoming. Dream come true!!

Vin Diesel also posted a picture of him with the Norwegian DJ on Instagram captioning it "I stepped out of my comfort zone for this one, haha. Let me know what you think. Thank you Kygo for producing this 2017 HIT! Thank you for believing in me enough to ask me to sing. Thank you Selena for bringing that beautiful and magical voice."

WOW!!!! The new Kygo mix is up on my Facebook page. I stepped out of my comfort zone for this one, haha. Let me know what you think. Thank you @kygomusic for producing this 2017 HIT! Thank you for believing in me enough to ask me to sing. Thank you @Selenagomez for bringing that beautiful and magical voice. Pained and celebratory simultaneously. I followed your lead when I went into the booth... #kygoselenavin #ItAintMe #gratefultomakemagic #believeinyou

Promoted
Listen to the latest songs, only on JioSaavn.com
Interestingly, break-up themed song It Ain't Me, which was released recently on February 15, is Selena's first new song in about a year.

Two years ago, the 49-year-old actor had also sung for Wiz Khalifa and Charlie Puth's See You Again as a tribute to the actor's late co-star friend Paul Walker at the People's Choice Awards.