"I'll never stop kissing your neck. Even when you're older and with someone," wrote Sumeet hilariously in his birthday wish for his little son 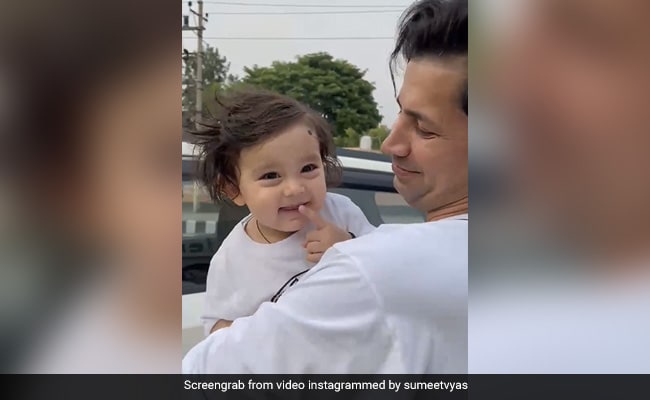 Sumeet Vyas and Ekta Kaul's son Ved is one year old now. On Thursday, the TV couple posted adorable birthday wishes for their baby son on their respective Instagram profiles. Ekta posted a video that was made using the Instagram filter runaway aurora. She can be seen playing with little Ved in her home garden in the clip. "And we are 1... One year of sheer bliss, happiness and pure love... Happy birthday, Veda... I love you... #oneyearofmotherhood #manymoretogo," she wrote in her post. Sumeet, on the other hand, shared glimpses of his quality time with his baby son. He can be seen hugging Ved and kissing on his neck in his post, which he captioned: "Happy 1st birthday Ved. You mean the world to me... And I'll never stop kissing your neck. Even when you're Older and with someone, remember, I told you this...." Aww.

Sumeet Vyas and Ekta Kaul welcomed Ved on July 3 last year. The couple, who had a fairytale wedding in September 2018, announced the arrival of their son with a simple yet sweet post on Instagram. "It's a boy. Shall be called Ved. Mamma and Daddy are acting cliche, smothering the child every few minutes," wrote Sumeet.

Sumeet Vyas has featured in several movies and web-series. He is best-known for his performance in TVF's 2014 web-series Permanent Roommates. His other web-series include Tripling, Tripling 2, RejctX and The Verdict - State vs Nanavati. Sumeet has worked in films like English Vinglish, Highjack, Veere Di Wedding, Made In China, Parched and Ribbon. Ekta, on the other hand, has worked in TV shows like Rab Se Sohna Isshq and Mere Angne Mein.