The actor had proposed to his girlfriend Disha Parmar on the show Bigg Boss 14. 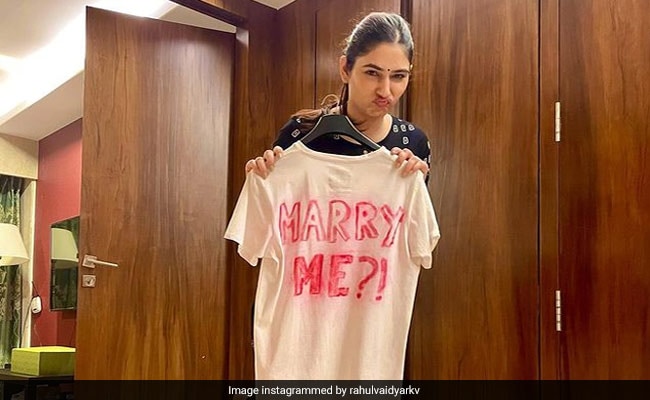 Singer Rahul Vaidya and actress Disha Parmar have been painting the town red ever since they made their relationship public, earlier this year. The couple, who appeared together in Rahul's music album, first spoke about their love for each other while Rahul was a contestant on the reality show Bigg Boss 14. In one of the episodes of the show, Rahul picked a white T-shirt with the words, "Marry me?" written on one side. As Rahul popped the question on Disha's birthday, the other side of the T-shirt featured the words "Disha HBD (Happy birthday day)," with a heart emoji.

Now, months after the show, Rahul has shared a photo of the T-shirt, this time being held in Disha's hands. In a series of photos and videos, Disha is seen posing with the T-shirt. Along with the post, Rahul wrote a note describing how special the garment was to him and that he intended to frame it. He wrote, " T-shirt I can never ever forget...Had proposed to my girl using this. Gonna frame it.”

Following Rahul's gesture, Disha had appeared on the show to reciprocate the affection. The two intend to get married once the pandemic situation in the country improves. The couple has been treating fans to mushy posts and the two are also often seen dropping sweet comments on each other's social media posts.

Here are some other photos of the happy couple.