What Parineeti, Akshay, Abhishek Did After Meeting Matthew McConaughey 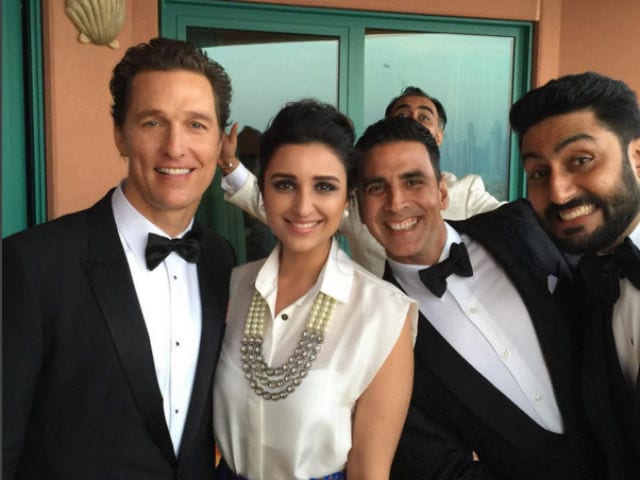 This image was posted on Instagram by Parineeti Chopra.

New Delhi: Actress Parineeti Chopra, who was the only Indian actress at a prestigious event in Dubai where teachers were honoured, said that she was 'starstruck' after meeting Hollywood actors Matthew McConaughey and Salma Hayek.

Parineeti attended the Global Teacher Prize event in Dubai on Sunday, and took a selfie with Matthew - a picture perfect moment which was photobombed by actors Abhishek Bachchan and Akshay Kumar.

"I was starstruck. It's not like every day that you meet these amazing great performers," Parineeti told IANS in a telephonic interview.

For the 27-year-old actress, it was a "proud moment" to be a part of an event, which was also attended by former US President Bill Clinton and Pope Francis.

"The fun and game is on its own, but it was a very proud moment for me that I was a part of this," said Parineeti, adding that Akshay, Abhishek and Ali Zafar also got to spend a lot of time with Matthew and Salma.

"We actually got a lot of time to spend with them. We were in Akshay's room, just taking pictures, chilling and talking about everything. We all went down to the beach, where the event was being held. The dinner was at the beach, so we just ate together. We got to spend the whole evening with them," Parineeti said in a tone which exuded excitement.

"I am so glad that they were humble and grateful enough to just spend time with us," she added.

Parineeti even shared that she told Matthew about how much she liked Interstellar, while she was surprised when Salma told her that she has seen some of her work.

Together, they even danced on Bollywood songs like Khaike paan Banaras wala and Jumma chumma.

"Ali was singing when he came down and took Abhishek and me on the stage. We started singing and dancing, and then we got Matthew to come on stage with us and I started him teaching him the steps," added Parineeti.

"We even got a lot of time to spend with his wife. So I tried to make her dance. We ended up dancing on Mr Bachchan's songs Khaike paan, a little bit of Jumma chumma and several other old Bollywood songs," said Parineeti.