What Malaika Arora Does On Set When It's A Rainy Day 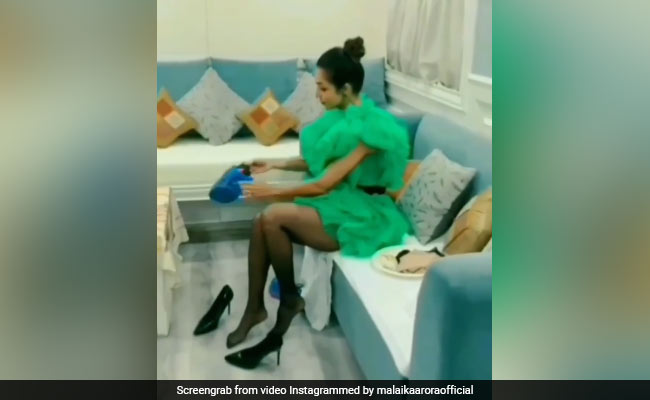 Malaika Arora, who recently resumed shoot for reality show India's Best Dancer, shared a behind-the-scenes video from the show's sets, which is basically all about the new normal. The video, on one hand, shows Malaika, getting ready in her vanity van, posing for the paparazzi and then making her way to the sets, and on the other, features some "real BTS" moments. Malaika, who initially styled her look with black stilettos, can be seen swapping her heels for sneakers to make the journey from the van to the sets as its muddy outside because of the Mumbai rain. Malaika's video doesn't have dialogues but is accompanied by ROFL thought bubbles describing Malaika's many moods. Malaika also shared a glimpse of her checklist before entering a set and it includes sanitizers and disinfectant sprays.

In a previous video, Malaika Arora showed us the sanitisation procedure she has to go through before entering the sets of India's Best Dancer. Talking about her first day on sets after months, Malaika wrote: "Stepping out of the house to resume work after almost four months... had a mixed bag of emotions... excitement, nervousness, happiness, fear. Things are definitely not the same but the show must go on."

Stepping out of the house to resume work after almost 4 months...had a mixed bag of emotions... excitement, nervousness, happiness, fear. Things are definitely not the same but the show must go on!! With extra precaution, extra efforts and a prayer that everything goes well, we all are restarting our lives and our work. The team went out of their way to make all of us comfortable and left no stone unturned to take all the necessary steps to ensure all the safety measures were in place. Felt like my first day of school after a long vacation and I was so excited to meet all my friends :) #TheShowMustGoOn #BackToSchool @malakelezzawy × @manekaharisinghani × @sonyentertainmenttelevision_ @divyachablani15 × @sheetal_f_khan ????@sajidkhan_photography Retouching- @retouchingartists

Skin issue is something that almost everyone in the world resonates with irrespective of their age or gender. Some have dry skin, some have oily, some have acne prone skin and some have extremely sensitive skin like I do. I have to be extremely careful of what I put in my skin cos any wrong product can do more damage than benefit. A natural ingredient that I swear by for my skin is fresh Aloe vera gel right from my very own home garden. Fresh Aloe vera agrees with most of the skin types so anyone can try it. Just cut one piece, slice it open and scoop up the gooey goodness from within and apply it evenly on ur face like a cooling mask. Rinse it with cold water after sometime and voila! Your skin will feel fresh and smooth all day long. #AloeLove #OrganicSkinCare #HomeGarden #SkinCare

We all want shiny luscious hair but we often fall short of taking care of them as much as we should. For some women hair is their identity and they deserve equal care just like your other body parts. Here's an age old but still effective method to 'maintain your mane'. Cold pressed coconut oil, Olive oil and Caster oil is like the holy Trinity for your hair. Mix these oils in equal portions in a glass jar and add some methi seeds and curry leaves. While methi seeds are high in protein and nicotinic acid content, which are known to be beneficial for hair, Curry leaves are a rich source of beta-carotene and proteins, which can reduce hair loss and increase hair growth. Let the mixture sit and infuse for a couple of days and voila! You have a home made, pure hair oil ready to do some magic on your hair #MalaikasTrickOrTip #HairCare #Champi

These are the magic seeds sitting right in your kitchen. You just need to unlock their magic and see the difference yourself. Fenugreek seeds (methi daana) and cumin seeds (jeera) have amazing health benefits and gut healing properties. Soaked in water overnight and drinking it in the morning helps in flushing out the harmful toxins from your body and it helps in improving your bowel movement. It also helps you fight against digestive problems. Methi seeds are a great remedy for diabetics as well. #HomeRemedies #MalaikasTrickOrTip #LoveYourGut #MalaikasNuskha #HomeMadeWithLove

Malaika Arora is a judge on India's Best Dancer along with choreographers Geeta Kapoor and Terence Lewis. In films, Malaika Arora was last seen in a song in 2018 movie Pataakha.