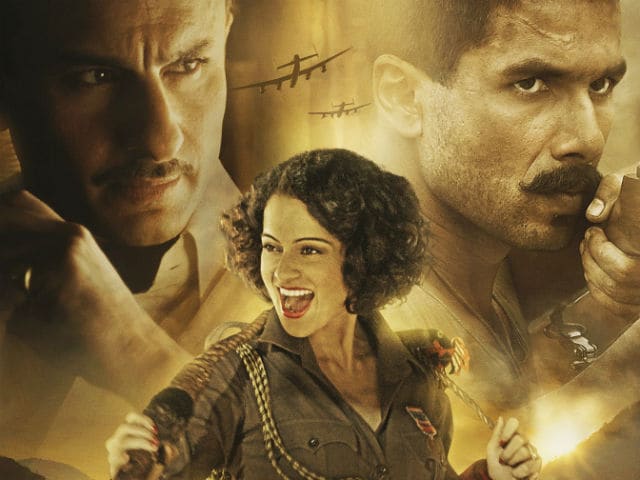 Rangoon: Kangana Ranaut, Saif Ali Khan and Shahid Kapoor in a poster of the film

New Delhi: Actress Kangana Ranaut has described her Rangoon co-stars Shahid Kapoor and Saif Ali Khan as 'special' and 'incredible actors,' reported news agency PTI. The cast of Rangoon are now on duty promoting their film and PTI quoted Kangana as saying, "They are incredible actors. They are amazing with Vishal Bhardwaj sir (director) and he has given them wonderful characters in the films that he did with them. They are both very special, very natural and spontaneous." Saif and Shahid have both been directed by Mr Bhardwaj before - Saif in Omkara and Shahid in Kaminey and Haider. This will be Kangana's first time working with all three men.

"I feel fortunate to be working with great actors like Saif and Shahid. I liked Saif as Langda Tyagi in Omkara and Shahid was incredible in Haider. They (Vishal Bhardwaj, Saif and Shahid) have great tuning and they had same energy for the film," Kangana told PTI.

Kangana's generous praise is in direct contrast to reports that she was difficult to get along with on set. These rumours were trashed by Shahid, who told PTI earlier, "Just take it easy. It is all good." Last year in June, Kangana said in a press conference that she was the "third hero" in the movie. In a separate interview to DNA, Shahid's reply to this was: "Why doesn't she say there are three heroines in the film? Is there anything less in being a heroine?"

Rangoon, which will be released on February 24, is a wartime drama and brings together the three actors on-screen for the first time. Kangana Ranaut, 29, told PTI, "Vishal Bhardwaj has courage to take on subjects which are different like Rangoon is a love story in the backdrop of World War II. It is a very courageous move and not many filmmakers will present a love story in rugged and rustic backdrop of war. He has that undying desire to push the envelope and go beyond what people expect from him."

Promoted
Listen to the latest songs, only on JioSaavn.com
Kangana Ranaut stars in Rangoon as an actress named Jaanbaaz Miss Julia. Saif Ali Khan and Shahid Kapoor play the two men she is involved with - film producer Rustom Billimoria and soldier Nawab Malik.