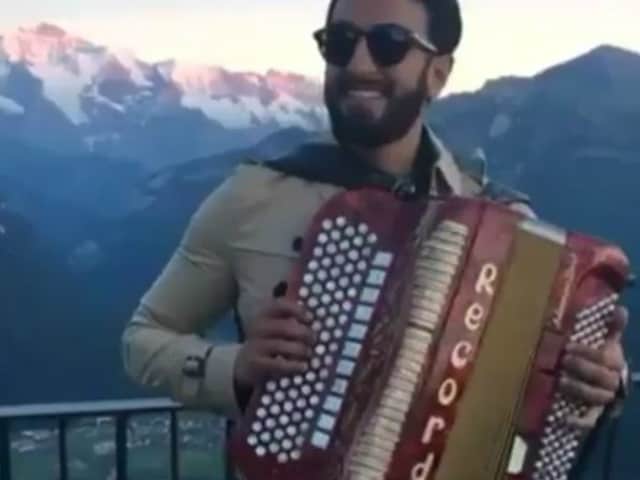 A still from the video shared by ranveersingh.

New Delhi: Ranveer Singh never fails to surprise and amuse with his antics. No, seriously. It appears that while in pardes, the 31-year-old actor was missing home majorly.

Promoted
Listen to the latest songs, only on JioSaavn.com
On Saturday, Ranveer Instagrammed a video in which he sings Pardesi Pardesi Tu Jana Nahi... from Raja Hindustani in a distorted voice while tourists around him can be heard breaking into laughter. All this happened in Switzerland, where he was vacationing earlier this month. Ranveer is befikre yes, we know that but his shenanigans are also part of promotions for his new film Befikre.

A red accordion, a kala chashma, that typical Ranveer smile and a view are all what makes the video special:

Belting out a cult hit for confused tourists in Switzerland. Just because. #JustBefikre

Where ever the place is, Ranveer is hooked to the view:

That was #JustBefikre batting from the Windies! Keep the faith tho..it ain't over til it's over. We've got this! ..also..I haven't moved from this position for two days..just saying.. #MustVegetate #IndvsWI

Earlier this month, Ranveer shared several envy-inducing pictures on Instagram from Switzerland. We bring you the best of them: