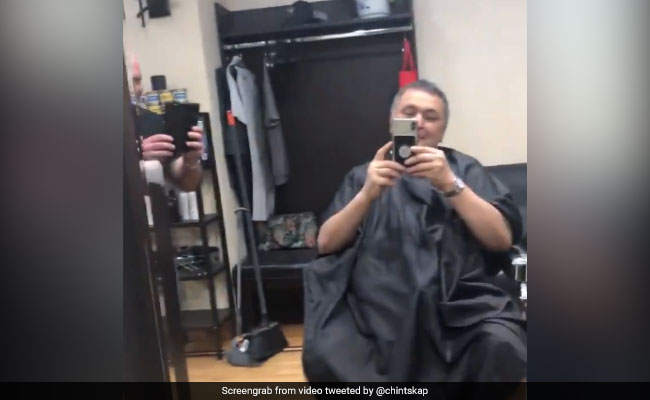 Rishi Kapoor in a still from a video shared by him. (Image courtesy: chintskap)

Rishi Kapoor has a never-ending list of fans all over the world and his latest Twittter post reminds us of just that. The actor who is currently undergoing cancer treatment in New York, shared a video from a hair salon there. The 66-year-old actor was getting a haircut done at a salon in the Big Apple, when he encountered a Russian fan, who instantly recognised him and started playing the song the Main Shayar To Nahin from Rishi Kapoor's 1973 film Bobby. An overwhelmed Rishi Kapoor shared a video on his Twitter profile and he wrote: "My anthem played in a salon whilst getting a haircut. Russian recognised me and played it from his note book. Thank you Sergei."

My anthem played in a salon whilst getting a hair cut. Russian recognized me and played it from his note book. Thank you Sergie. pic.twitter.com/nnHJVo3OyS

On Saturday morning, Rishi Kapoor posted a picture of himself along with his wife Neetu Kapoor and Bollywood actor Suniel Shetty and his wife Manna Shetty. Sharing the picture from their New York get-together, Rishi Kapoor wrote: "Thank you Suniel and Manna Shetty. You both are such a gem of a couple. God Bless! Love you guys."

Thank you Sunil and Manna Shetty. You both are such a gem of a couple. God Bless! Love you guys. pic.twitter.com/fItEAGOskP

On Friday, the actor shared a throwback picture from Aa Ab Laut Chalen (which was originally shared by fan). In his tweet, the actor cryptically hinted at homecoming and wrote: "Filming in New York, 1998 - 'Aa Ab Laut Chalen' - title so symbolic today."