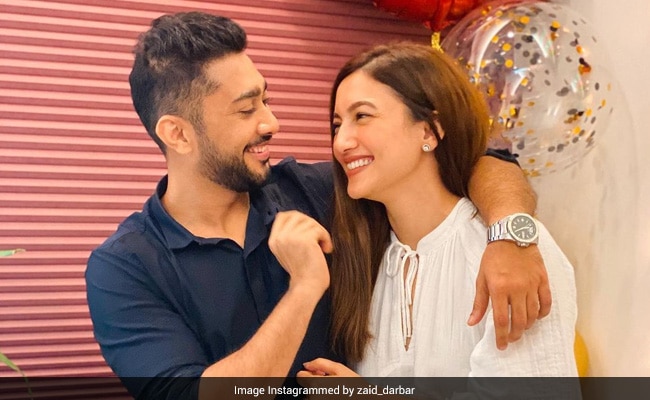 Gauahar Khan, who was one of the "toofani seniors" in Bigg Boss 14, left the house earlier this week and has been trending on social media since then. After her exit, choreographer Zaid Darbar, who is rumoured to be dating the actress, welcomed her back home with an adorable post. Zaid Darbar, son of music composer Ismail Darbar, posted a cute photograph of himself and Gauahar Khan and wrote: "Just killing it like always. Welcome back, Queen! More success and power on your way." The photo features the actress wearing a white dress while Zaid Darbar can be seen sporting a casual outfit.

Just killing it like always Welcome back Queen! More succes and power on your way @gauaharkhan #Gaza

Along with Gauahar Khan, seniors Sidharth Shuka and Hina Khan were also asked by Bigg Boss to leave the house in Wednesday's episode of the show. The trio had entered the show to guide new contestants in the game.

Coming back to Gauahar Khan and Zaid Darbar, reports about the duo's rumoured relationship surfaced on the Internet after Gauahar posted series of photos and videos on her Instagram profile featuring Zaid. "No other like you," she captioned one of the posts while Zaid has also been sharing pictures of themselves with adorable captions. Take a look:

Drop it like it's Hotttt ... had the craziest time rehearsing n shooting this ! This was take 1 : Take 2 is on @zaid_darbar 's page ! . #comment n let us know which take do u like better ! I like the take on his page BTW n He likes the one on mine @razishaikh6 choreo Boss ! #DanceIsLove

It feels lively around you ! See you super soon #Gaza

This song was too much fun . @zaid_darbar Ure too good in this one What's your fave step ?? I hope u guys love this ! #comment . @maninderbuttar love this track ! Choreography @razishaikh6 Location : @creator21.official

Earlier, a Times Of India report stated that Gauahar Khan and Zaid Darbar will reportedly get married next month. However, the couple haven't reacted to the report yet.

In terms of work, Gauahar Khan has featured in films such as Rocket Singh, Game and Ishaqzaade. She has participated in reality TV shows such as Jhalak Dikhhla Jaa 3, Fear Factor: Khatron Ke Khiladi 5 and was the host for India's Raw Star. She also participated as a contestant in the eleventh season of Bigg Boss.