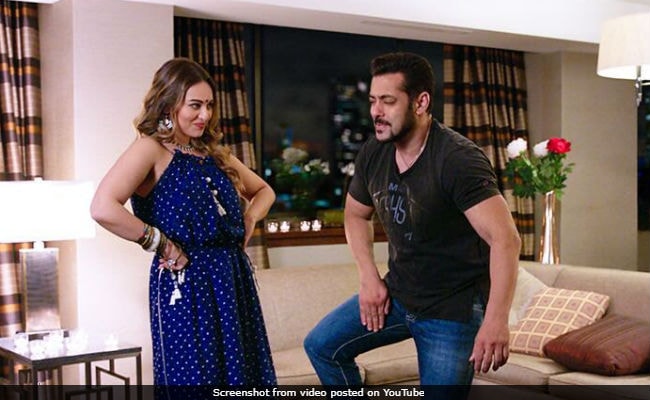 New Delhi: Welcome To New York's latest trackNain Phisal Gaye is out and this romantic number, featuring Salman Khan and Sonakshi Sinha, will surely cheer up your day. The song is a sweet reminder of the duo's sizzling chemistry as Chulbul Pandey and Rajjo in Tere Mast Mast Do Nain and Tore Naina Bade Dagabaaz Re. Speaking of their iconic pairing, Sonakshi shared the song on Twitter, along with a caption that read: "It's here!!! Mere mast mast do nain phisal gaye for the one and only @BeingSalmanKhan!!! Reunited with the hit spinners Sajid-Wajid and the dynamic voice of @iPayalDev... Watch it here: #WelcomeToNewYork."

Crooned by Payal Dev, this romantic number has been written by Kausar Munir and composed by Sajid-Wajid. The video opens to Sonakshi Sinha facing difficulties working on a project and that is when Diljit Dosanjh comes to her rescue and suggests her to imagine that 'she is working with superstar Salman Khan'. The idea alone sends Sonakshi into a fancy imagination where she sees herself taking measurements of Salman Khan's body.

Salman Khan, on the other hand, will leave you in splits as he enacts all of his famous dance steps from his popular films like Sultan, Wanted and Dabangg.

Sonakshi, who marked her debut opposite Salman Khan in Dabangg, had been teasing her fans since morning asking them to guess, who'll she be measuring in her next film.