"We Have Come A Long Way": Ekta Kapoor Shares A Throwback Pic With Jeetendra, Shobha And Tusshar Kapoor

"Guess what my dad is thinking," wrote Ekta 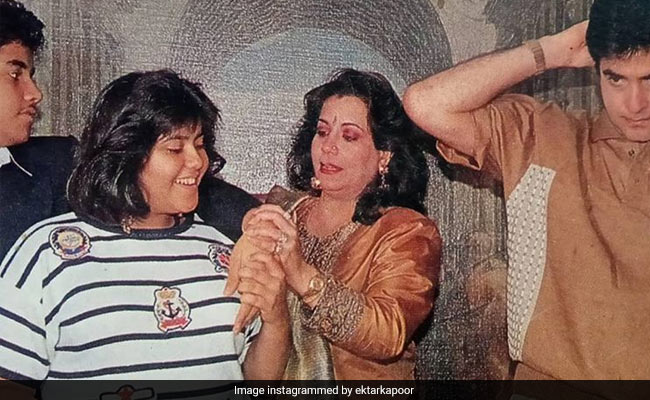 Ekta Kapoor just made our Monday better. The 44-year-old producer just dropped a super adorable family picture on her Instagram profile and it is making her Instafam swoon. In the rare throwback picture, the iconic star Jeetendra can be seen posing with his hand on his head while his wife Shobha can be seen engrossed in a conversation with a pint-sized Tusshar Kapoor and Ekta Kapoor. Shobha, Ekta and Tusshar can be seen holding hands together while Jeetendra can be seen looking away from the camera. Sharing the priceless throwback picture, Ekta wrote, "Well well! We have come a long way." She further added to her caption which resonates with what we are wondering as well. "Guess what my dad is thinking," she added. Take a look at the throwback post made by Ekta Kapoor here:

Well well! We have come a long way! Guess wat my dad is thinking

A few days ago, Ekta shared another priceless throwback memory featuring her family on her Instagram story. The picture, originally posted by a fan club on their profile was shared by Ekta. In the picture, Jeetendra, Shobha, Ekta and Tusshar were seen posing for the camera. Ekta and Tusshar twinned in white while Shobha looked pretty in a dark blue saree. Jeetendra was seen posing for the camera in a white shirt. Take a look:

Ekta Kapoor "I had fun, and I thought the best part of life was chilling. I thought lazy was cool and I didn't know anything more. I actually thought that people who worked were really foolish because, why do I have to work? My Dad has got enough money; I don't want much in life. I need to have a good meal, twice a day, and I want to spend my whole life watching television. I was a couch potato. Actually, I loved watching television. I didn't do very well in studies... Then my father got an offer with a friend to make television, and I took that on. And suddenly I realized that I was putting in somebody's money...because my Dad had put a lot of trust in me, that I would do something, he really thought I had it in me, because no one thought that, including me. And suddenly, I realized that I was putting in somebody's money, and it was going down the drain, and I decided to take my work seriously." - Ekta Kapoor, 2007. Caption courtesy CNN. @ektaravikapoor @tusshark89 @shobha9168 #ektakapoor #birthdaygirl #ektaravikapoor #talented #jayvejay #jeetendra #jeetendrakapoor #shobhakapoor #80sbollywood #retrobollywood #cinelink #tussharkapoor

Jeetendra got married to Shobha in October, 1974. They welcomed their daughter Ekta in 1975 and their son Tusshar in 1976.

On the other hand, Tusshar Kapoor was last seen in the 2017 action-comedy Golmaal Again where he shared screen space with Ajay Devgn, Arshad Warsi and Kunal Kemmu. He will next be seen in Laxmmi Bomb co-starring Akshay Kumar and Kiara Advani.