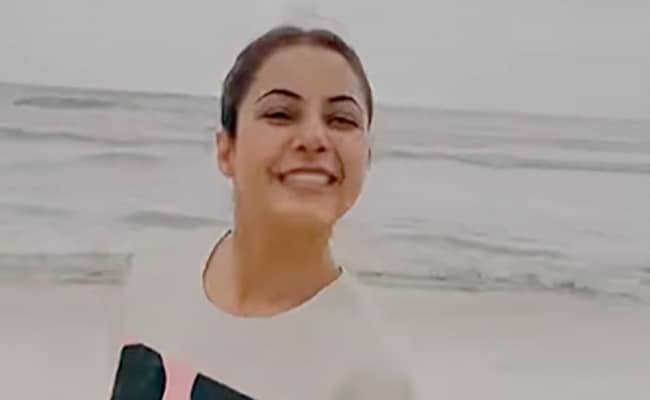 A still from the video. (courtesy: shehnaazgill)

Shehnaaz Gill needs no introduction. The actress, who made her way into people's hearts with the reality show Bigg Boss, enjoys an unparalleled fan following on social media and otherwise. Now, the actress has sent fans into a tizzy by simply dropping a video of her dancing on the beach. She, however, is not alone in the clip but is seen dancing and goofing around with her brother  Shehbaz Badesha. The siblings are seen dancing to the newly released song Aunda Janda, written and sung by Shehbaz. In the video, the brother-sister duo are seen in their casual best. Shehnaaz let the video do all the talking and just dropped three hashtags – #Aundajanda #badeshashehbaz #shehnaazgill – in the caption.

Shehbaz replied to the post with a heart and smile emojis.

A few days ago, Shehnaaz Gill dropped a set of stunning images of herself dressed in a red ensemble with a flower emoji in the caption.

In another post, Shehnaaz Gill dropped a set of pictures with a white heart emoji in the caption. Replying to the post, designer-actress Masaba Gupta left a heart-eyes emoji, while Rhea Kapoor reacted with fire emojis.

Shehnaaz Gill also recently posted a set of images of herself playing in the mud, presumably for a shoot. In the caption, the actress said, “Spa time,” and added the hashtag "offroading."

The actress also grabbed headlines recently when she was questioned about her lovelife. When asked if she was dating TV presenter and choreographer Raghav Juyal, Shehnaaz said, “Media jhoot kyun bolti hai? Media har bar jhoot bolti hai and kuch bhi bolti hai. Hum kisi ke saath khade ho jayein ya kisi ke saath ghum lein toh relation mein hai? Nahin na...toh bas, media fizool bolti hai. Ab main hyper ho jaungi (Why does the media lie? It says anything. Just because we are standing with someone means we are in a relationship with them? No, right? I'll get hyper now).”  Read all about it here.

On the work front, Shehnaaz Gill was last seen in a Punjabi film titled Honsla Rakh alongside Diljit Dosanjh and Sonam Bajwa.