"Get vaccinated," Alaya said in the video 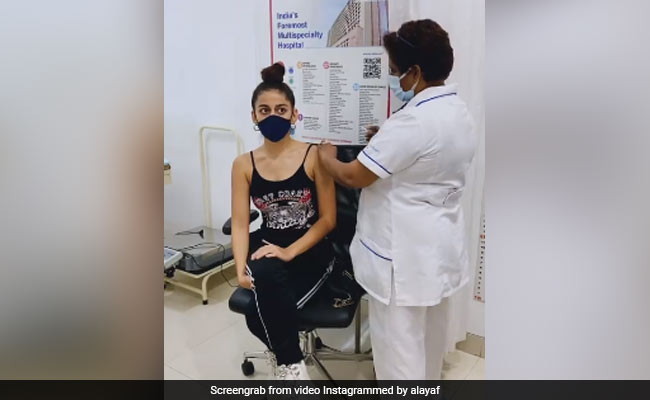 Alaya Furniturewalla in a still from the video. (Image courtesy: alayaf)

Actress Alaya Furniturewalla, on Wednesday, received the first dose of her COVID-19 vaccine. The 23-year-old actress shared the update with her fans on Instagram and also implored everyone to "get vaccinated." In the video that she posted on Instagam, Alaya Furniturewalla can be seen receiving the vaccine shot. In the beginning of the video, she can be seen sitting on a chair. "Get vaccinated," she says. In the video, we can see a slightly fearful look on Alaya's face which vanishes instantly when the medical officer tells her that the vaccination has been done. "Oh really? Oh, thank you. That was so great. It wasn't bad at all," she says in disbelief after getting the vaccine shot.

Alaya can be seen dressed casually in a black spaghetti top and matching joggers in the video. She tied her hair in a bun. "Vaccinated," Alaya Furniturewalla wrote in the caption of the post. The actress' post received several comments from her fans.

Alaya Furniturewalla often shares quirky posts on Instagram. A much-loved post by the actress is the video, in which she tried the 'Buss It' challenge and gave it a COVID twist.

Daughter of actress Pooja Bedi and grand-daughter of actor Kabir Bedi, Alaya made her Bollywood debut in 2020 with the film Jawaani Jaaneman. The film also starred Saif Ali Khan and Tabu. Alaya received the Filmfare award this year for her debut in the film.