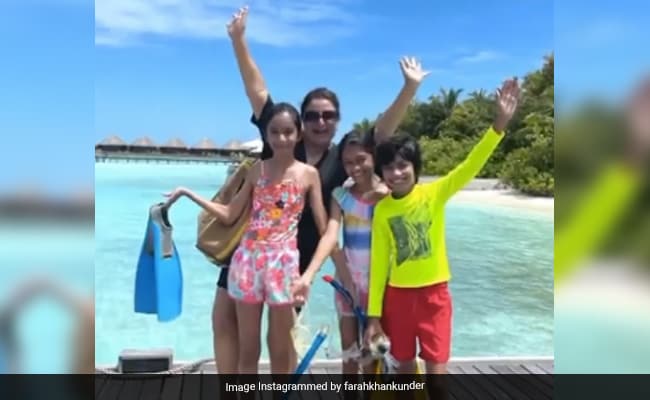 Farah Khan has the cutest dog video ready for you. The choreographer-director has returned from a vacation in the Maldives with her kids, and there was someone who missed them dearly. It is their pet, Smoochy. The ecstatic pooch snuggled and jumped on the children as soon as they entered the house. Farah was quick to capture the happy moment and share it on Instagram. Farah, who is known for her humour, gave a fun twist to the clip by picking the song Kab Ke Bichhde Hue from the movie Laawaris. "When the welcome back is like this...," she wrote in the caption. Undoubtedly, the latest upload by Farah became an instant hit on the social media platform.

The Happy New Year director was constantly updating our feed, sharing snaps from the family holiday. In the latest one, Farah posted a montage from her beach holiday. The mother of three captioned it as, "What we need to give to our kids is not things but memories." The clip shows the trio wearing trendy beachwear and experimenting with cooking, snorkelling and cruising.

The triplets also played table tennis that was declared as "Worst Match Ever" by Farah.

Basking in some fresh sunlight while in the Maldives, Farah wrote, "Valuing all things we took for granted...Being in the sunshine without a mask most of all.."

The 56-year-old also channelled her romantic side by uploading a pretty still of a moonlit beach. "The moon was so beautiful the ocean held up a mirror," read the caption.