"Look who walked into my vanity van," wrote Farah Khan 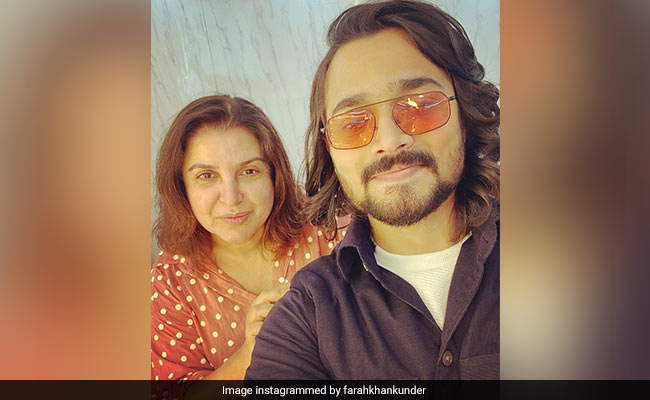 We can't help but love Farah Khan and her amazing sense of humour. The choreographer-turned-filmmaker manages to add the perfect caption to every post. Her latest Instagram entry is not an exception. Farah Khan, self-admittedly, found a way to "increase" her social media followers and let's just say that she was kind enough to share it with the world. Fine, we'll just tell you what happened. Farah Khan posted a picture with YouTuber Bhuvan Bam (who has over 11.2 million followers on Instagram). Posting the picture with the social media star, Farah Khan added a humour-infused caption and wrote: "Look who walked into my vanity van! Best way to increase followers... Pose with the crazily talented Bhuvan Bam." She added the hashtags #fanclub and #senseofhumor to her post.

Remember the throwback picture that Farah Khan shared a few days ago? The one that featured Farhan Akhtar. She wrote: "Before internet, Wi-Fi and computers there was dance! The best family bonding. Farhan Akhtar and I in my ever flash dance haircut tripping the light fantastic. #dancingcousins #thosewerethedays (my beautiful mom in the sari at the back with Rosy maami)."

Farah Khan, who stepped into the Indian film industry as a choreographer, made her directorial debut with the 2004 film Main Hoon Na. She has also directed films like Om Shanti Om, Tees Maar Khan and Happy New Year. Her last production venture was Netflix's Mrs Serial Killer, starring Jacqueline Fernandez and Manoj Bajpayee. The film was directed by Farah's husband Shirish Kunder. Farah Khan married Shirish Kunder in 2004 and the couple became parents to triplets in 2008, after whom the couple's production house "Three's Company" is named.