Pooja Batra and Nawab Shah opted for an Arya Samaj wedding, which took place on July 4 in the presence of their family members. 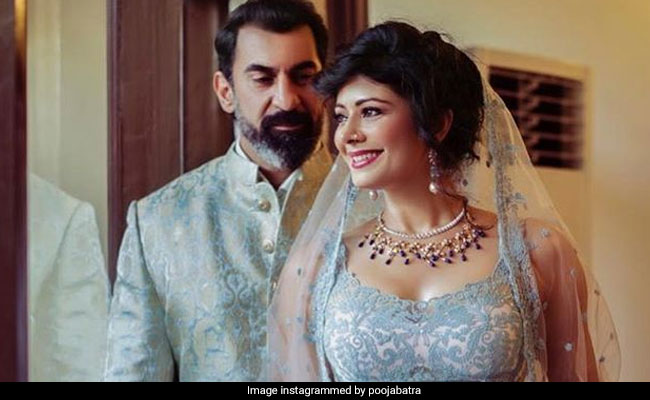 Read Pooja Batra's story of falling in love and marrying Nawab Shah? Now take a look at Nawab Shah's version of events. A day after Pooja Batra confirmed she's married to Nawab Shah in an interview with Bombay Times, the Bhaag Milkha Bhaag actor spoke to Times Of India and said that he wanted to 'marry Pooja after their first meeting.' Nawab Shah was quoted as saying, "Pooja entered my life like sunshine and I was sure that I wanted to spend the rest of my life with her. In fact, I wanted to marry her right after our first meeting." Nawab Shah made his relationship with Pooja Batra Insta-official on Eid this year and they got married in a private ceremony in New Delhi earlier this month.

"We had no doubts about the relationship or each other, which is rare in today's day and age. We connected so beautifully, that everything came together for us," Nawab Shah said.

Speaking about their mhush-hush wedding, Nawab Shah said, "We hadn't planned anything. We were just ready to start a life together and grow together. There was no point in wasting any time and that's why it happened suddenly. In fact, I tell her that we have less time together as we took some time to get married. I am glad that everything fell in place."

Pooja Batra, who has featured in films such as Virasat, Haseena Maan Jayegi, Kahin Pyaar Na Ho Jaaye and Jodi No 1, earlier told Bombay Times said that she married Nawab Shah because she saw 'no point in delaying it any further.' She said, "Our loved ones kept asking us why we were delaying it (the marriage). I was simply going with the flow, but then I realised that he is the man I want to spend the rest of my life with, and there is no point in delaying it any further. So, here we are. We had an Arya Samaj wedding, and we will register our marriage this week."

On Tuesday, Pooja tweeted this picture of herself with Nawab Shah dressed in wedding couture and wrote, "Thank you for all your good wishes and blessings."

Thank you for all your good wishes & Blessings

Pooja Batra and Nawab Shah opted for an Arya Samaj wedding, which took place on July 4 in the presence of their family members.