Wanna Join Raghu Ram And Son Rhythm On Their Play Date? Just "Get In The Bunker" 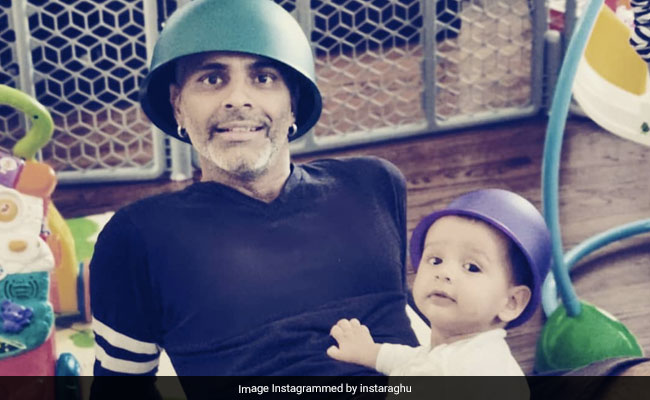 TV personality Raghu Ram shared a glimpse of his play date with son Rhythm on Tuesday and it looks fun. He posted a photo, in which the father-son duo can be seen sporting what appear to be round plastic flowerpots. While the actor can be seen wearing a t-shirt and shorts, the little munchkin looks adorable in a white t-shirt and blue trousers. The photo appears to be from Rhythm's indoor play area. Sharing the photo, Raghu Ram captioned it: "No time to explain. Wear a pot and get in the bunker!" He also accompanied the hashtags like #DadLife and #DadsOfInstagram. Raghu Ram's wife Natalie Di Luccio, reacting to the post, dropped laughing and heart emojis in the comments section.

No time to explain. Wear a pot and get in the bunker!! #BabyRhythm #DadLife #DadAndSon #DadsOfInstagram

Raghu Ram's Instagram feed is filled with adorable photos of Rhythm. The caption on of the photos read: "I'll be your legs till you can walk, little one!" while sharing the other one, the actor wrote: "Baby Rhythm is 6 months old today! And before we traveled to Toronto, my parents got us to do the ceremonial introduction to solid food, #Annaprasana for him. He now tastes new foods every few days. Messes never looked so cute!"

I'll be your legs till you can walk, little one! #DadLife #DadsOfInstagram #Smile @soulslings_india

#BabyRhythm is 6 months old today!! And before we traveled to Toronto, my parents got us to do the ceremonial introduction to solid food, #Annaprasana for him. He now tastes new foods every few days. Messes never looked so cute! @nataliediluccio

Raghu Ram married Natalie Di Luccio in a beach wedding in December 2018. They welcomed Rhythem earlier this year. The couple introduced their little bundle of joy to their fans like this on social media:

I am Rhythm. I was born at the moment of creation. I permeate the universe. Like light. Like love. I am present in the very ebb and flow of life. I can be felt in every heart beat. You can hear me in every song. I can be found in the changing of seasons and in raindrops falling on a face turned up to the heavens. I cannot be contained in any one culture. I transcend countries and continents. I am global. Nay, I am Cosmic. Eternal. I am Rhythm. Hello World!

Raghu Ram was previously married to actress Sugandha Garg. The couple parted ways in 2016. Raghu Ram is best-known for hosting MTV India reality shows Roadies and Splitsvilla. He has also featured in a few Bollywood movies such as Tees Maar Khan and Jhoota Hi Sahi.