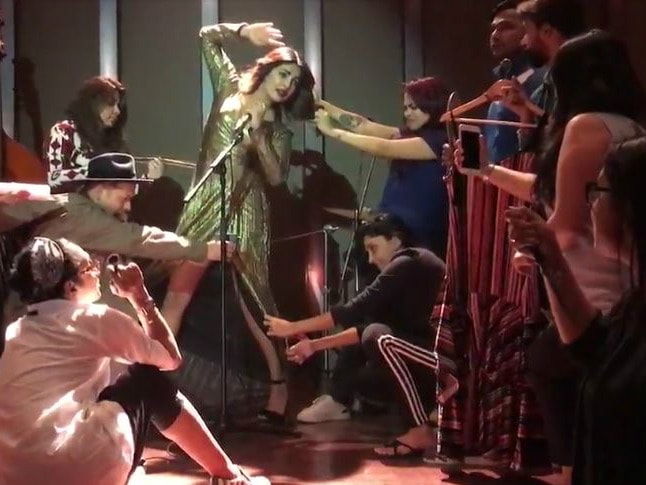 New Delhi: Priyanka Chopra sure has style. Priyanka, who has sashayed down several international red-carpets, is rocking the West and currently back home for the holidays. Priyanka said that before she shoots back to New York, the 34-year-old actress will zero in on her upcoming Bollywood movies. After all, Priyanka Chopra's crew in India misses her. As a tribute to her team, Priyanka starred in a catchy video which features only a part of her team in India. "This is just a part of my India team. Can't believe I got them to stop working for one min," she wrote when shared the video on Twitter.

The one-minute-long video stars Priyanka Chopra and her hair stylist and designer and coordinator and make-up artist and social media manager and photographer and a few others - all of who are featured in freeze frames as the camera pans across the room. Priyanka, also in a freeze frame, looks dazzling in a gold ensemble with a microphone in her hand. She is ready to perform while the rest of her team members are busy prepping her look.

Wait for a surprise at the end of the video, which is set to Flo Rida's GDFR:

Freezing this moment forever..This is just a part of my India team- can't believe I got them to stop working for 1min! See u in the new year pic.twitter.com/meKu5rcEqe

Meanwhile, Priyanka Chopra is letting her hair down all over Mumbai. On Tuesday night, she was spotted partying with her friends - Dia Mirza, Neha Dhupia and Sushant Singh Rajput at a homecoming party hosted by designer Manish Malhotra.

Such a fun night with some of my faves@priyankachopra@ManishMalhotra@ShaliniSharma_@rohiniyer@itsSSR@NehaDhupia#HotSquad#bye2016pic.twitter.com/p8wVLJbMGO

Celebrating you @priyankachopra so good seeing you! Thank you @manishmalhotra05 for another memorable night and for being the best host!

Priyanka has a very packed schedule after her winter holidays - she will get busy with the remaining portions of Quantico season 2. She will also be prepping for People's Choice Award, for which she has been nominated for the second time in a row, courtesy her performance as FBI-turned-CIA agent Alex Parrish on Quantico. Priyanka will also be gearing for the release of her Hollywood debut - the Baywatch movie. Baywatch features Priyanka Chopra as the main villain Victoria Leeds and releases on May 26.

Promoted
Listen to the latest songs, only on JioSaavn.com
It has been a very good year for Priyanka Chopra. She has ranked on the Forbes' list of the world's highest paid TV actresses this year. She has scored a place ahead of actors like Jennifer Aniston and Leonardo DiCaprio on an iMDB list of the most popular celebrities of 2016.