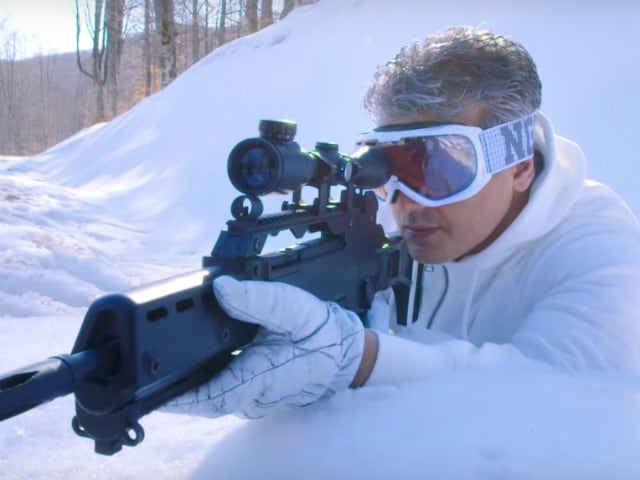 New Delhi: Ajith Kumar is back with a bang in the teaser of his new film Vivegam. Starring as a special agent of the Counter Terror Squad, the South superstar features in high-octane action scenes set across what appears to be Serbia and Bulgaria. Ajith Kumar's entry is carefully timed half-way through the teaser, following an unprecedented terror attack in the heart of Serbia. Ajith's character, also reported to be of an interpol officer, sports only one expression throughout - determined and resolute to protect and kill. Meanwhile, "Never, ever give up," Aijith Kumar can be heard saying in the Vivegam trailer.

Ajith's action stunts are reminiscent of Hollywood action blockbusters such as Tom Cruise's Mission Impossible series of films and the James Bond films featuring Daniel Craig. The bike scene in particular will give you a major Mission Impossible deja vu. Another scene featuring Ajith in stealth mode and dressed to blend in with the snow, reminds us of the famous snow scene from SPECTRE.

Promoted
Listen to the latest songs, only on JioSaavn.com
Ajith Kumar's new film also stars Akshara Haasan, Kajal Aggarwal and Vivek Oberoi, none of who feature in the teaser. Vivek is all prepped to make his Tamil debut being cast in the role of an antagonist in the film. "After much contemplation, the makers have finalized Vivek as the antagonist. He will join the sets later this month," IANS reported a source close to the film's unit as saying.

Directed by Siva, Vivegam is scheduled to hit screens in August. This marks Ajith's third collaboration with the director after 2014's Veeram and 2015's Vedhalam.