Viral: The Internet Is Crushing On Bobby Deol's Son Aryaman 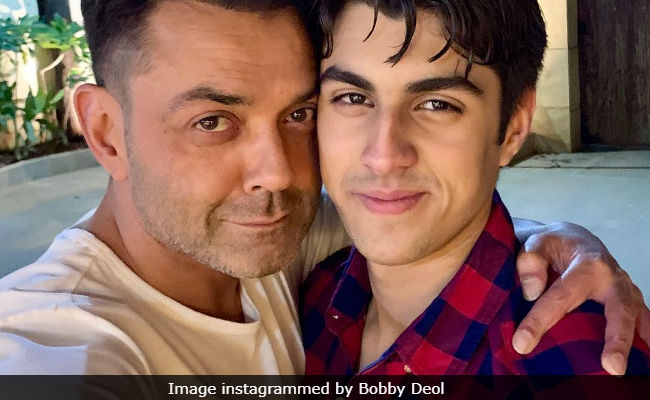 The Internet is apparently head-over-heels in love with Bobby Deol's son Aryaman after the Soldier actor put up a picture of him on Instagram. After the picture went viral, an Instagram user wrote, "I'm love struck... your son... OMG, will he marry me...?" while another comment read: "I'm moving to India, he's so handsome." Bobby Deol posted the picture as a part of his 50th birthday celebration and wrote: "My son is symbolic to this change, finding a friend in his young father. I hope to continue living my life happily with all of you loved ones. I have turned 50 but I'm still always going to be the twenty-something young adult all set to win the world."

Here's the now viral picture of Bobby Deol and his son Aryaman:

If that's how it feels!! Being 49 was amazing .. 50 is going to be even better ... I reminiscence the life experiences I have been through and how they have made me grow as an individual. I take the same opportunity to remember the amount of love that all of you dear to me have given me. It is this love that is my strength which keeps me going. My son is symbolic to this change. Finding a friend in his young father. I hope to continue living my life happily with all of you loved ones. I have turned 50 but I'm still always going to be the twenty something young adult all set to win the world. - Love Love Love to all

Bobby Deol is married to Tanya Deol and they are parents to two sons Aryaman and Dharam (named after his grandfather Dharmendra, born Dharam Singh Deol). As of now, the Deols have not shared details of Aryaman's career plans but going by the viral picture, it appears that the Internet definitely wants to see him on the big screen.

For now, Aryaman's cousin Karan Deol, son of Sunny Deol, is gearing up for his Bollywood debut with Pal Pal Dil Ke Paas. The film is directed by Sunny Deol.

Meanwhile, Bobby Deol who was briefly absent from the film scenario, returned to the silver screen with 2017's Poster Boys and followed it up with Race 3, co-starring Salman Khan. He was last seen in Yamla Pagla Deewana: Phir Se while his next project is Housefull 4.