Viral: Taapsee Pannu Shuts Down Troll Who Demanded She Speak In Hindi

Taapsee Pannu was interrupted during an event in Goa and her reply is winning the Internet. 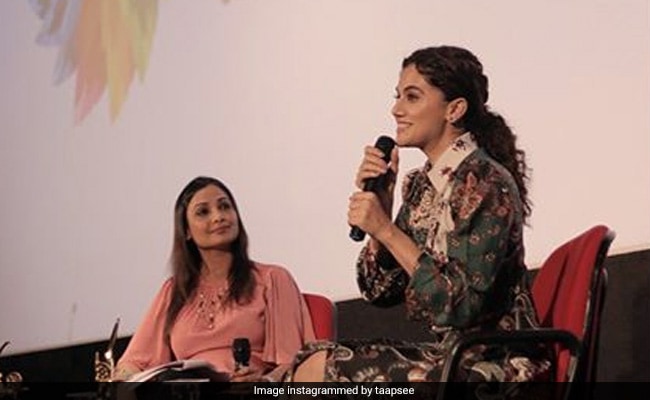 Actress Taapsee Pannu's gutsy reply to an audience member, who trolled her for not speaking in Hindi at a recent event in Goa, is going viral on the Internet. Taapsee Pannu was speaking at the Women in Lead session at the International Film Festival of India (or IFFI), when she was interrupted by an audience member who asked her to speak in Hindi because 'she is a Hindi film actress.' To this, Taapsee replied, "Sir, main to pura Hindi me baat karsakti hoon, par kya yahan sabko Hindi samajh aayegi? (Sir, I can speak in Hindi for the entire session but does everyone understand Hindi here?)" When the attendee 'reiterated' that she was a Hindi film actress, Taapsee replied, "Main south Indian actress bhi hoon... Tamil aur Telugu main bhi baat karu? (I'm also a south Indian actress... so, should I speak in Tamil and Telugu too?)... I want to get to maximum people..."

Taapsee's reply earned her cheers and applause from the audience and the rest of the session went on without interruptions. You can watch Taapsee's interaction here.

Soon after the video went viral, a Twitter user accused Taapsee for not speaking Hindi because it is not an 'elite language,' to which the Badla actress replied, "Thinking and not language makes a person elite."

Taapsee's Twitter fans cheered for her again. "You slay like a boss," wrote one fan while another added, "#TaapseeOnFire! She sIayed a vicious troll who was trying to school her... Taapsee you are a staaaa (that's star but with an accent)." Another Twitter user added, "More power to you! We are with you ma'am #TaapseeOnFire."

More power to you! We are with you ma'am #TaapseeOnFire

"Taapsee is on a roll.
Shuts down another Troll."

What a befitting reply.

Slayed all the trolls.