Forbes List Aside, Taapsee Pannu Is Confident That She Can Beat Akshay Kumar At This Race 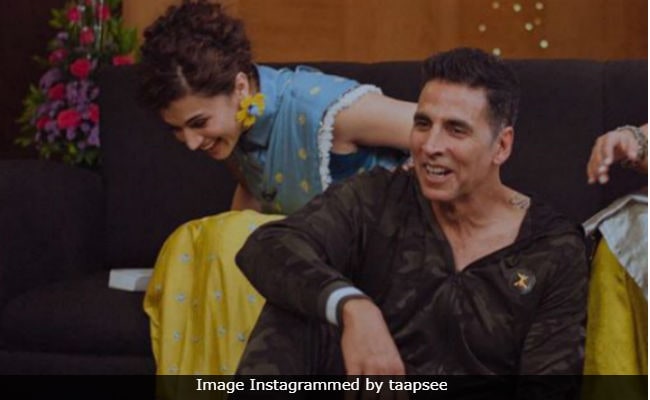 Mission Mangal co-stars Akshay Kumar and Taapsee Pannu had a hilarious conversation on Twitter on Friday morning. Akshay shared the motion poster of Taapsee's forthcoming film Rashmi Rocket on Twitter (more on the film later). In his post, Akshay, very smoothly, made a reference to his film Mission Mangal and wrote: "This rocket is set for her next mission and she's off to the tracks. Presenting a glimpse of Rashmi Rocket." In case you were thinking it doesn't get better than this, wait till you read Taapsee's response. The Manmarziyaan actress tweeted: "Yay! Don't know about Forbes but ye race toh main jeet sakti hun.." For those who don't know, Taapsee's comment was with reference to the fact that Akshay Kumar ranks fourth on the Forbes global list of top 10 Highest Paid Actors 2019. What followed suit was a hilarious reply from Akshay. The PadMan actor shared a meme featuring himself, the text on which read, "Maje le rahi hai tu."

Check out Taapsee Pannu and Akshay Kumar's fun-filled conversation here. It doesn't get better than this.

This ROCKET is set for her next MISSION and she's off to the tracks! Presenting a glimpse of @taapsee in and as #RashmiRocket.@MrAkvarious@RonnieScrewvala@RSVPMovies@iammangopeople#NehaAnand#PranjalKhandhdiya
Music for the motion poster: @LesleLewispic.twitter.com/5whNWUcuus

Taapsee shared the motion poster of her forthcoming film Rashmi Rocket on her Twitter profile. The film will be directed by Akarsh Khurana and it will be jointly produced by Ronnie Screwvala, Neha Anand and Pranjal Khandhdiya. Sharing the motion poster, Taapsee wrote: "On your marks...Get set...Halo. Meet the headstrong and fearless Rashmi Rocket. Shooting starts soon."

Take a look at the motion poster of Rashmi Rocket here:

On your marks...
Get set....
Halo..
Meet the headstrong
And fearless #RashmiRocket.@MrAkvarious@RonnieScrewvala@RSVPMovies@iammangopeople#NehaAnand#PranjalKhandhdiya@shubhshivdasani
Music for the motion poster: @LesleLewis

Other than Mission Mangal, Tapsee Pannu and Akshay Kumar have co-starred in the 2017 spy-thriller Naam Shabana and the 2015 film Baby.