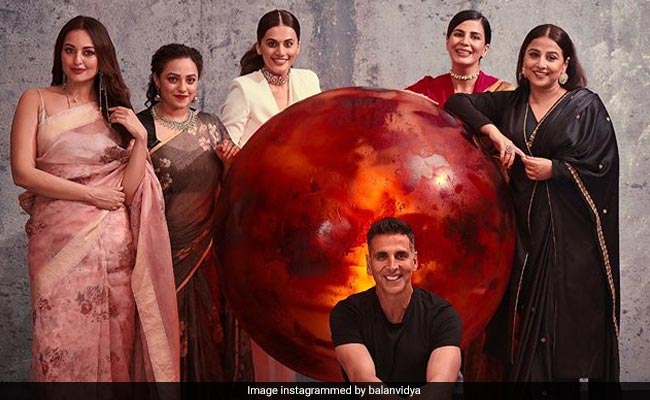 Mission Mangal's ensemble cast - Akshay Kumar, Vidya Balan, Sonakshi Sinha, Taapsee Pannu, Kirti Kulhari and Nithya Menen - are busy promoting their much talked about movie ahead of its release. Needless to say that the co-stars share a great bonding with each other, as can be seen in the promotional events, and a glimpse of which is there in Vidya Balan's Antakshari video, which is now crazy viral. In Vidya's Instagram video, Team Mission Mangal can be seen playing antakshari when on a bus tour, supposedly between promotional duties. The caption of her Vidya is dipped in signature Vidya humour and reads: "Antariksh se Antakshari tak ka safar."

For those who missed the reference, antariksh translates to the word 'space' in English and Mission Mangal is about India's Mars Orbiter Mission (MOM).

Vidya Balan and Taapsee Pannu are absolute enthu-cutlets in the video while Akshay Kumar is no less as he joins the game with his rendition of Kishore Kumar's Geet Gata Hoon Main.

Vidya Balan's Instagram is an album full of fun-filled moments from Team Mission Mangal's promotional diaries. From discovering Kirti Kulhari's singing skills to trolling Nithya Menen for serving food on sets, here are glimpses of everything that makes a great team.

@iamkirtikulhari you sing so effortlessly & beautifully !! BTS #MissionMangal promotions .... So much fun!! All our teams at work to make sure its a #MissionAccomplished . @akshaykumar @taapsee ‘s back @nithyamenen

My sporting fellow southie @nithyamenen feeds us . A team that eats together slays together ..... #MissionMangal releasing on 15th Aug !! @akshaykumar @taapsee @iamkirtikulhari @sharmanjoshi P.S: @aslisona where are you !?

Now, with Misson Mangal round the corner, here's little background on the film's theme - it's the story of how a bunch of rookie space scientists, captained by their determined Mission Director (Akshay Kumar) and Project Director (Vidya Balan) make the Indian Space Research Organisation's (ISRO) Mars Orbiter Mission a success in 2013.

Anil Kapoor Had Tears In His Eyes When He Saw Sunita Kapoor As His Bride. Read His Post