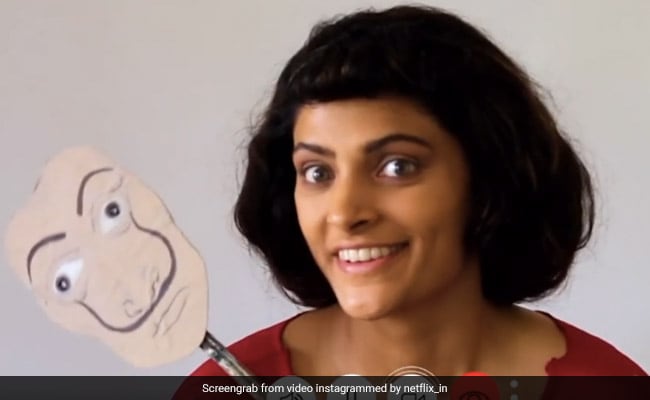 Saiyami Kher in a still from the video. (courtesy: Netflix_in)

Bollywood actress Saiyami Kher is once again in the headlines. No, it isn't not for her recently-released film Choked but it is something on similar lines. (read Netflix connection). Recently, streaming giant Netflix shared a "leaked auditions" video of the actress on its social media profiles and it is going insanely viral (for all the right reasons). The hilarious video shows the actress auditioning for popular Netflix shows like Sacred Games, Money Heist and Stranger Things. BTW, the video doesn't comprise footage from the actual auditions. The caption on the post shared by Netflix read: "Sarita and Saiyami were made for each other. #Choked #PaisaBoltaHai."

Saiyami begins the video by auditioning for crime lord Ganesh Gaitonde's role from Sacred Games (which was played by Nawazuddin Siddiqui). Saiyami gave the lines a different connotation altogether by substituting the expletives with the word "bhaisaab."

Next, she auditioned for the popular show Money Heist, where she sings (no points for guessing) Bella Ciao, in her own style. After that, the Mirzya actress auditioned for Eleven's character from Stranger Things. After much ado, Saiyami finally bagged the lead role in Anurag Kashyap's Choked and the rest is history.

Choked opened to stellar reviews from film critics. In his review for NDTV, film critic Saibal Chatterjee gave Choked 4 stars out of 5 and wrote: "It promises deliverance while obscuring the constant rumblings that warn of impending chaos. It dances, sings and weaves circles around the residents of a four-storey building in Mumbai. "