In her message, Priyanka Chopra said: "This is going to be a big step in your journey and I just want to say good luck" 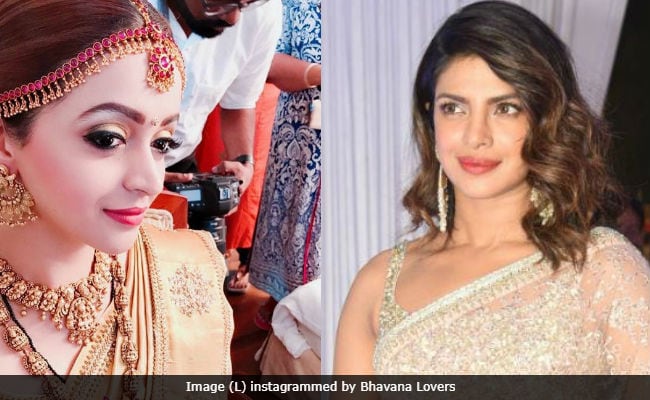 New Delhi: Malayalam actress Bhavana is all set to get married to her longtime boyfriend Naveen today and hours before the big day, a video of actress Priyanka Chopra congratulating the happy couple went viral. In the video, which has been shared by several fan clubs, Priyanka said: "I just wanted to wish you a very happy married life. This is going to be a big step in your journey and I just want to say good luck. You're an extremely feisty, brave and amazing woman and I admire you a lot. Much love and always." Bhavana and Naveen got engaged in March last year in a private ceremony.

The first picture of Bhavana, dressed as a bride is doing the rounds of social media. Bhavana looks gorgeous in a gold kanjivaram sari festooned with temple jewellery and maatha-patti. The couple will reportedly get married in a simple ceremony today in the presence of their respective families and friends. A reception for the newly-weds will be hosted in the evening.

Promoted
Listen to the latest songs, only on JioSaavn.com
Bhavana made her Malayalam film debut in 2002 with Nammal when she was all of 16. She won the Best Actress (Special Jury) trophy in Kerala State Awards for her role in the film. She went on to star in films like Chithiram Pesuthadi, Daivanamathil, Swapnakoodu and C.I.D. Moosa. Bhavana has also featured in Tamil film Chithiram Pesuthadi, Telugu film Ontari and Jackie in Kannada.

She was last seen in Adam Joan and he next film will be Tagaru, directed by Duniya Soori.
Comments
bhavana actress weddingpriyanka choprabhavana naveen