Viral Pics: Suhana Khan And Her Partners In Crime Party On A Yacht 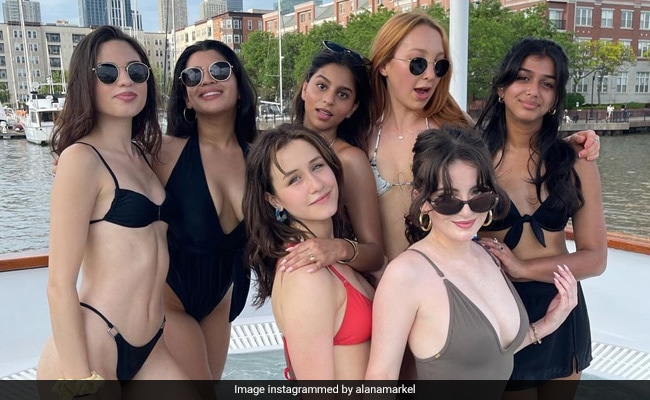 Shah Rukh and Gauri Khan's daughter Suhana Khan, who just celebrated her 21st birthday, is having the time of her life in New York. Suhana goes to New York's Columbia University and often shares glimpses of her life in the Big Apple on Instagram. Suhana is also often spotted in posts shared by her friends and this story is about one such. The bunch of new photos appear to be from Suhana Khan's birthday celebrations - looks like she took a little trip with her best pals on a yacht and had a blast. Suhana featured in a blink-and-miss photo posted by her pal Alana Markel, who later deleted the post. In the now viral photo, which has been re-shared by fan-clubs, Suhana can be seen chilling with her friends in a Jacuzzi while partying on a yacht. Suhana reacted to the post with the red heart emojis.

Here's how Suhana and her friends like to party.

Earlier, Suhana Khan was also spotted twinning with her friends in black - needless to say Suhana was the show stealer. These photos too could very well be from Suhana's extended birthday celebrations.

Here are some more glimpses of Suhana turning 21 and celebrating the big birthday with her friends.

On Sunday, Suhana marked her 21st birthday with this gorgeous photo of herself. Suhana, known for being a fashionista in the making, looked every bit stunning in pastel bodycon dress with cut-outs for her birthday.

Suhana Khan is Shah Rukh Khan and Gauri Khan's middle child. She goes to New York's Columbia University, aspires to be an actress. Last year, Suhana Khan flew back from New York to Mumbai and spent months with her parents in the Maximum City. She also hung out with her besties - Navya Naveli Nanda, Ananya Panday and Shanaya Kapoor.

When Mandira Bedi Did 33 Handstands In A Row. See What She Posted