Actor Jerome Flynn, who we are so used to seeing in heavy armour and in a sword wielding avatar, can be seen casually dressed in the photo 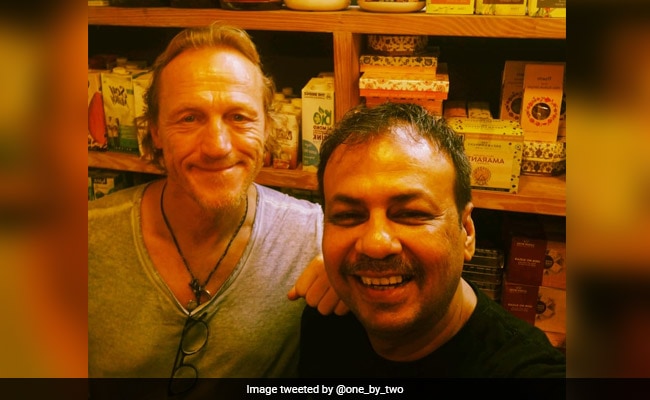 Game Of Thrones actor Jerome Flynn, who played the character Ser Bronn of the Blackwater in the HBO series, found a spot on the trends' list after a photo of him chilling at a cafe in Mumbai's Khar began doing the rounds on the Internet. It all began with a tweet on stand-up comedian Atul Khatri's timeline, in which he shared a photo of the Game Of Thrones actor to say: "Ser Bronn of the Blackwater (Jerome Flynn) of Game Of Thrones at my friend's cafe in Khar, Mumbai some time back," on Monday evening. "How cool!" he added. Pretty cool indeed! Actor Jerome Flynn, who we are so used to seeing in heavy armour and in a sword wielding avatar, can be seen casually dressed in the photo for a fun evening out.

Take a look at the viral photo of Ser Bronn of the Blackwater aka Jerome Flynn here:

How cool! Ser Bronn of the Blackwater (Jerome Flynn) of #GameOfThrones at my friend's cafe in Khar, Mumbai some time back pic.twitter.com/z5m7oVROY6

Jerome Flynn's character Ser Bronn was a highly trained, lethal mercenary, who offered his services to anyone who gave him a better deal in the Game Of Thrones. During the course of Game Of Thrones, Ser Bronn grew particularly familiar with Tyron Lannister and Jamie Lannister at separate timelines on the show. Interestingly, Ser Bronn's life-long dream was to own a castle of his own, which eventually came true with him becoming the Lord of Highgarden at the end of the series.

Alluding to Ser Bronne's fondness for castles, several Twitter users dropped hilarious comments about his trip to Mumbai possibly being in search of a castle.

In search of castle

He got castle in India then

Guess he got his castle besides Gaitonde in Gopalmath

Game Of Thrones wrapped this year with a shocking season finale, which impressed some and left others disappointed. The HBO series had 32 nominations at the Emmy Awards and took home the Best Drama trophy.