Late on Monday, Neetu Singh shared a fresh set of photos that showed how all the family members came together for the puja on Diwali. 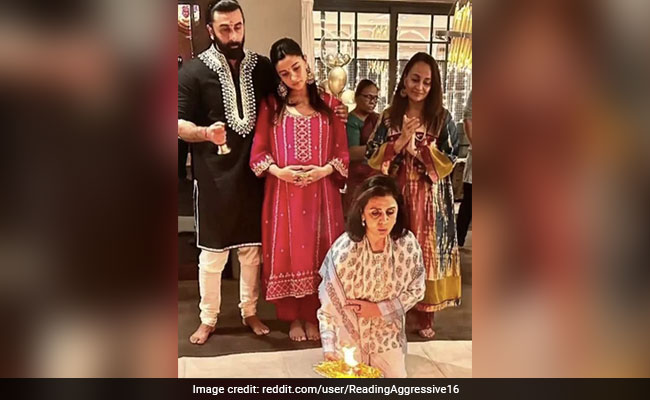 The Diwali celebration photo posted by Neetu Kapoor on her Instagram Stories.

Actors Alia Bhatt and Ranbir Kapoor celebrated their first Diwali after tying the knot in April. The photos of the celebration were posted by Ranbir's mother Neetu Kapoor on her Instagram Stories. Ali Bhatt's mother Soni Razdan is also seen in the now-viral photos. Ms Bhatt had shared a Diwali greeting on Monday evening. She shared two pictures - a throwback from last year and the second picture is a current one, in which she was seen posing with her cat Edward. The actress revealed that she posted a throwback because she is "spending Diwali in bed" this year.

Late on Monday, Neetu Kapoor shared a photo that shows how all the family members came together for the puja on Diwali. In the photo, Neetu Kapoor is seen performing the Lakshmi Puja with an oil lamp and Ranbir playing the hand bell.

Neetu Kapoor also shared a post after the puja that shows her, Alia, Ranbir, her sister Shaheen and mother Soni Razdan in one frame.

Neetu Kapoor has captioned the post, "Happy Diwali." It has received more than 200,000 likes with many from the film industries posting comments.

Alia Bhatt is expecting her first child with husband Ranbir Kapoor. She announced her pregnancy in an Instagram post in June this year. She married 'Brahmastra' co-star Ranbir Kapoor in April this year at their house Vastu, in front of a few family members and close friends. The star couple had been dating for over 5 years before getting married. Their story began on the sets of Ayan Mukerji's 'Brahmastra', their first film together.