Jeetendra celebrated his 77th birthday with Ekta Kapoor and her industry friends. Jeetendra and his wife Shobha Kapoor danced to Jawani Janeman 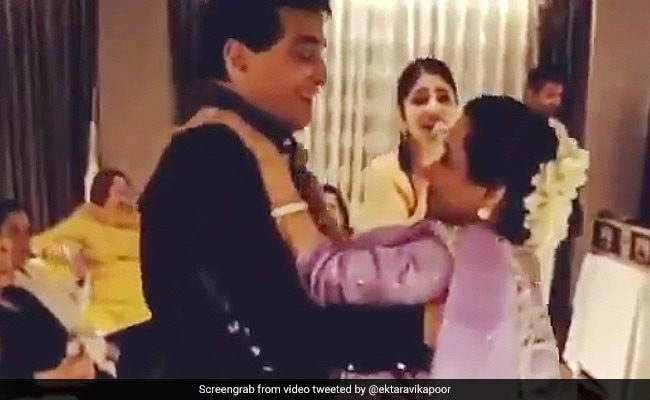 Jeetendra celebrated his 77th birthday and how (courtesy ektaravikapoor)

Veteran actor Jeetendra's still got the moves! The actor, who turned 77 on Sunday, celebrated his birthday with a party on Saturday night. A video of Jeetendra dancing with his wife Shobha Kapoor at the party has been shared by the couple's daughter Ekta Kapoor on Twitter and it's crazy viral now. In the video, Jeetendra and Shobha Kapoor can be seen grooving to Jawani Janeman - an all-time favourite track from Eighties' film Namak Halaal. "Parents are gods on earth! May you live my years too! Happy birthday, papa," wrote the TV czarina on Twitter. Jawani Janeman originally featured Parveen Babi along with Amitabh Bachchan and Shashi Kapoor.

Take a look at Jeetendra and Shobha Kapoor dancing here.

Jeetendra's birthday party was made special by Ekta Kapoor's friends from the TV industry. Spotted on the guest list were Anita Hassanandani, Mona Singh, Krystle D'Souza and Mushtaq Sheikh, who also shared adorable birthday posts for Jeetendra. "Happy birthday, Jeetu uncle may you always have that shining smile. Thank you Shobha Kapoor for such a lovely evening," wrote Mona while "Happy birthday, Jeetu uncle!! Such fan-girl moments I have around a legend like him," Instagrammed Krystle.

Happy birthday Jeetu Uncle !! Such fan-girl moments I have around A LEGEND like him

Happy birthday Jeetu uncle may u always have that shining smile. Thank u @shobha9168 for such a lovely evening

Jeetendra married Shobha Kapoor in 1974 and they are also parents to actor Tusshar Kapoor. Jeetendra is best known for his starring roles in films such as Jaani Dushman, Khushboo, Caravan, Parichay, Waris, Justice Chaudhry, Arpan and Khandaan among others. He was last seen in 2006 film Ho Jaata Hai Pyaar.