The couple got married in an intimate ceremony in January 2001 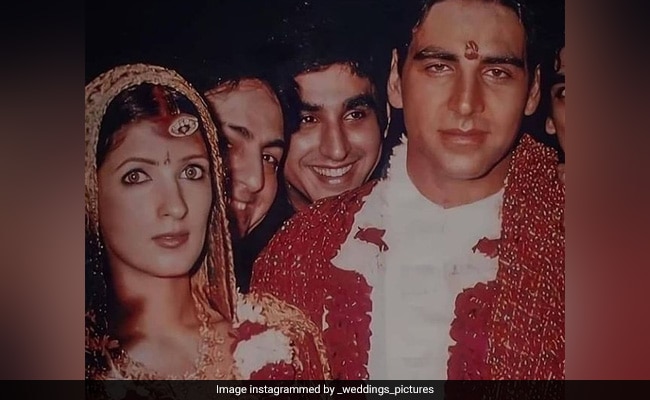 Akshay Kumar and Twinkle Khanna occupied a spot on the list of trends on Thursday after several unseen pictures from their wedding album surfaced on the Internet. The couple got married in an intimate ceremony in January 2001 and are now parents to a son named Aarav and a daughter - Nitara. Since Thursday morning, several fan clubs have been sharing unseen photos from the couple's wedding and the pictures have now gone viral on social media. In one photo, newlywed Akshay and Twinkle can be seen posing for the camera while in another, the duo can be seen twinning in white outfits.

On their 20th marriage anniversary earlier this year, Akshay Kumar and Twinkle Khanna wished each other on social media with adorable posts. The actor shared a picture with his wife and wrote: "The surest I've ever been of a partnership...Twenty years of togetherness and you still make my heart flutter and sometimes even drive me up the wall but then again I wouldn't have it any other way coz a smile is never far when you are near. Happy anniversary Tina."

Actress-turned-author Twinkle shared this sweet note for Akshay: "You are the beauty and the brawn in this partnership and I can't even say I am the brain, because you are smarter than me. We don't need each other to be complete (that's just a cliche from soppy ballads) but we want to have the other one around always and that is perhaps the only way it is meant to be. Happy Anniversary Mr K."

In terms of work, Akshay Kumar will be seen in Bell Bottom, Sooryavanshi, Raksha Bandhan, Ram Setu, Bachchan Panday and Atrangi Re.

Alia Bhatt Decodes Her OOTD: "Husband's Away, Stole His Blazer"