"You are the beauty and the brawn in this partnership," wrote Twinkle Khanna 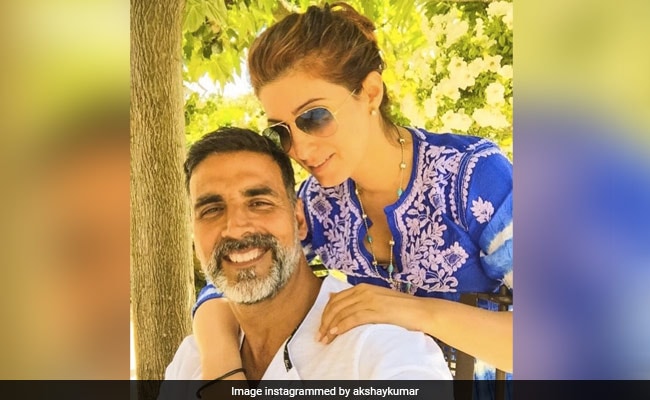 Akshay Kumar and Twinkle Khanna, who are celebrating their 20th wedding anniversary today, shared perfect greetings for each on their respective social media accounts. Akshay Kumar posted a happy picture with his wife and author Twinkle Khanna and he wrote: "The surest I've ever been of a partnership...Twenty years of togetherness and you still make my heart flutter and sometimes even drive me up the wall but then again I wouldn't have it any other way coz a smile is never far when you are near. Happy anniversary Tina."

Re-posting the picture shared by Akshay Kumar, Twinkle Khanna wrote: "You are the beauty and the brawn in this partnership and I can't even say I am the brain, because you are smarter than me. We don't need each other to be complete (that's just a cliche from soppy ballads) but we want to have the other one around always and that is perhaps the only way it is meant to be. Happy Anniversary Mr K."

On Twinkle Khanna's birthday, 47th birthday in December, Akshay Kumar wrote in his note: "Here's to another year of questionable life decisions. But I'm so glad I get to make all of them with you. Happy birthday Tina." Twinkle Khanna and Akshay Kumar co-starred in films such as International Khiladi and Zulmi. They got married on January 17, 2001. The couple are parents to 18-year-old Aarav and Nitara (8).

Akshay Kumar has a super busy schedule in 2021. The actor recently shot for Atrangi Re with Sara Ali Khan and Dhanush. He will also be seen in Bell Bottom and Bachchan Panday. He will also star in Prithviraj, which is a biopic of Prithviraj Chauhan. Sooryavanshi, which is Akshay Kumar's foray into Rohit Shetty's cop universe, is expected to release in theatres this year. The actor announced two new projects last year - Raksha Bandhan and Ram Setu. He was last seen in the horror comedy Laxmii.

Here's What Amitabh Bachchan Tweeted About The COVID-19 Vaccination Drive