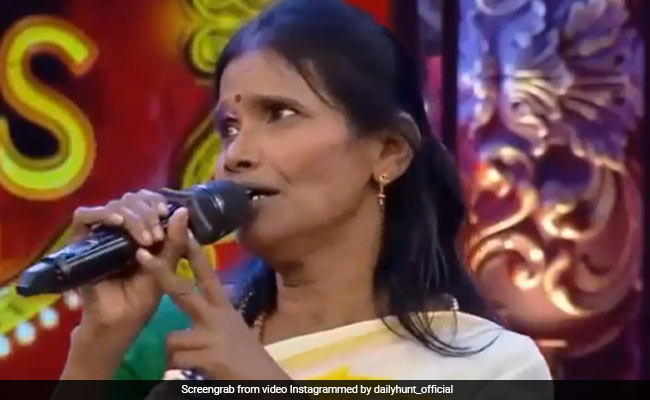 Ranu Mondal in a still from the video. (Image courtesy: dailyhunt_official)

Remember Ranu Mondal? The singer who became an Internet sensation overnight. Well, she is trending for her singing prowess yet gain. A few days ago, the singer made an appearance as a special guest on the Malayalam television reality show Comedy Stars, where she sang the iconic song Tujhe Dekha Toh Yeh Jaana Sanam from Shah Rukh Khan and Kajol's 1995 film Dilwale Dulhania Le Jayenge . A snippet from the episode was shared on a fan page on Instagram and it spread like wildfire. Check out  Ranu Mondal 's viral video here:

Ranu Mondal became a household name after a video of her singing Lata Mangeshkar's Ek Pyar Ka Nagma Hai at Ranaghat railway station surfaced on social media earlier this year and it went insanely viral. The singer was soon approached by music composer-singer Himesh Reshammiya, who invited her to the singing reality show Superstar Singer, where he features as one of the judges. She also recorded two songs for Himesh's film Happy Hardy And Heer.

Ranu Mondal trended big time after her singing was reviewed by legendary singer Lata Mangeshkar. Ms Mangeshkar, in an interview with news agency IANS, said, "Agar mere naam aur kaam se kisi ka bhala hota hai toh main apneaap ko khush-kismat samajhti hoon (If anyone gets benefited by my name and work, then I feel fortunate)." The singer added, "But I also feel imitation is not a reliable and durable companion for success. By singing my songs or Kishore Kumar's or Mohammed Rafi saab's or Mukesh bhaiya or Asha Bhosle's numbers, aspiring singers can get short-term attention."