Ranu Mondal Goes From Railway Station To Recording Studio: 'Had Faith In My Voice'

"The magnitude of the stage given to me by Himesh ji is something that I didn't anticipate," said Ranu Mondal 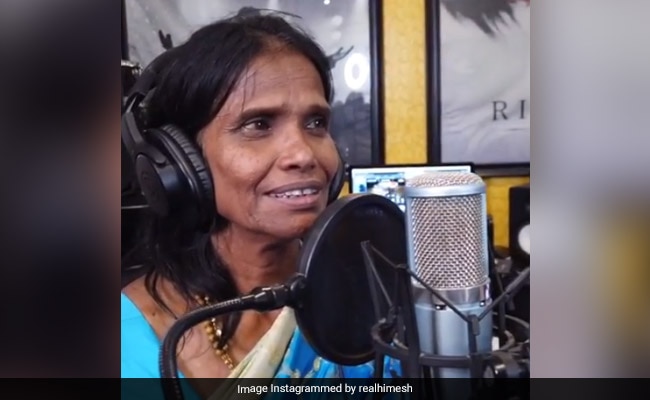 Following the success of her viral singing video, Ranu Mondal is again making a string of headlines after her debut song Teri Meri Kahani from Himesh Reshammiya's Happy Hardy And Heer dropped on the Internet on Wednesday. Ranu, 59, says that she always had "faith in her voice and never lost hope" that one day she will get a change to perform on stage. Talking about her future as a professional singer, Ranu Mondal said: "When I used to sing, I didn't realise this day would come but I had faith in my voice. I was initially inspired by Lata Mangeshkar ji's voice and used to sing as a child. Even in the future I'll continue to sing. I never lost hope. Yes, the magnitude of the stage given to me by Himesh ji is something that may be I didn't anticipate," she was quoted as saying by news agency PTI at the launch of Teri Meri Kahani.

Speaking about singing in a film, Ranu Mondal said she is "grateful" that Himesh Reshammiya gave her the "big chance" and added: "I am grateful for the love of people. They have given me immense love and I got a chance to sing. Himesh ji gave me this big chance, relying solely on my voice. If I didn't have the love, I maybe wouldn't have been able to sing songs."

Ranu Mondal also said the opportunity to perform on stage will never affect her bond with music and added that even though she took a gap before, she never stopped practicing singing. "I never stopped listening to songs. I used to listen to songs of Rafi, Mukesh, Kishore Kumar, Lata ji, Kumar Sanu and Sonu Nigam. I used to listen to them on cassettes and learn continuously," she said.

Ranu Mondal earlier used to sing at Ranaghat railway station to earn money. Her life changed after her aforementioned video caught the attention of social media, opening several opportunities for her.