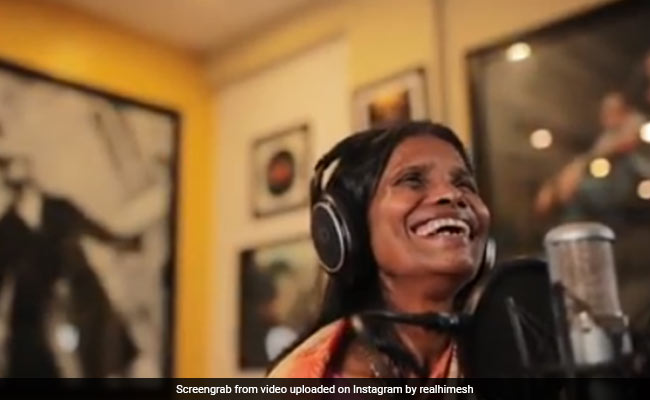 Weeks after Ranu Mondal became an overnight Internet sensation after a video of her singing Lata Mangeshkar's song Ek Pyaar Ka Nagma Hai at Ranaghat railway station went viral, her estranged daughter Elizabeth Sathi Roy told news agency IANS that she had no idea her mother used to sing at a railway station and added that though she did not visit her mother regularly, she was in touch with her. Elizabeth Sathi Roy is being criticised by the Internet for allegedly abandoning her mother in old age, speaking of which she told IANS that she tries to take care of her mother as much as possible and said that she has 'struggles of her own.' Elizabeth Sathi Roy, who is one of Ranu Mondal's four children, says she a single mother running a small grocery store and she's asked her mother to stay with her several times but she refused.

"I didn't know that ma used to sing at the railway station because I could not visit ma regularly. I had been to Dharmatala (in Kolkata) a couple of months ago and found her sitting aimlessly at a bus stand. I told her to go home immediately and gave her Rs 200. I used to send her Rs 500 as and when possible using an uncle's account. I am a divorcee and run a small grocery shop in Suri (a small town in Birbhum district), where I stay. I am a single mother looking after my younger son. So, I have my own struggles. Still, I try to look after ma as much as I can. I tried to get her to stay with us several times, but my mother does not want to stay with us. Despite this, people are blaming me. The public is against me. Who do I go to now?" Elizabeth Sathi Roy told IANS.

Speaking to IANS, Elizabeth Sathi Roy said that she is Ranu Mondal's daughter from her first marriage and she also has an elder brother. Ms Mondal has two children with her second husband. She said, "My father passed away a few years back. Ma's kids from her second husband probably stay in Mumbai now, though I am not sure. Her second husband is still alive. I am her first husband's daughter, and I have an elder brother and a half-brother and half-sister. We are not in touch with each other. Why don't the other kids take responsibility of ma? Why nobody is blaming them? I want them to come forward and take care of ma along with me."

Elizabeth Sathi Roy also said that she had limited contact with Ranu Mondal after she got married and moved to Kolkata from Mumbai, where she used to stay with her family. She told IANS that despite living in a joint family she used to help her mother in every way possible. "I have tried to support ma in whatever way I could. I would take food and money for her every time I went to meet her... Maybe I couldn't stay with ma, but I have taken care of her as much as I could."

Elizabeth Sathi Roy also blames the members of Ranaghat's Amra Shobai Shoitaan club, who are looking after her mother, of not letting her get in touch with Ranu Mondal and also accuses them of threatening her.

"It feels like as if Atindra Chakraborty and Tapan Das (club members) are my mother's own sons. They, and other members of the club, have threatened to break my leg and throw me out if I try to get in touch with my mother. They don't let me talk to ma even over the phone. Also, they are brainwashing ma against me. I feel helpless... Tapan and Atindra want fame, so they have sidelined me... Tapan takes money from my mother in the pretext of buying goods for her daily use. They have taken Rs 10,000 from ma's account and bought only a suitcase and a couple of nighties for her. I don't trust them at all."

"Even though everybody is blaming me, I will continue to support ma. I will request ma to come and stay with me in Suri, but I will never force her... She has been through a lot in life and is finally getting recognition for her god-gifted voice. I am proud to be her daughter," Elizabeth Sathi Roy concluded.