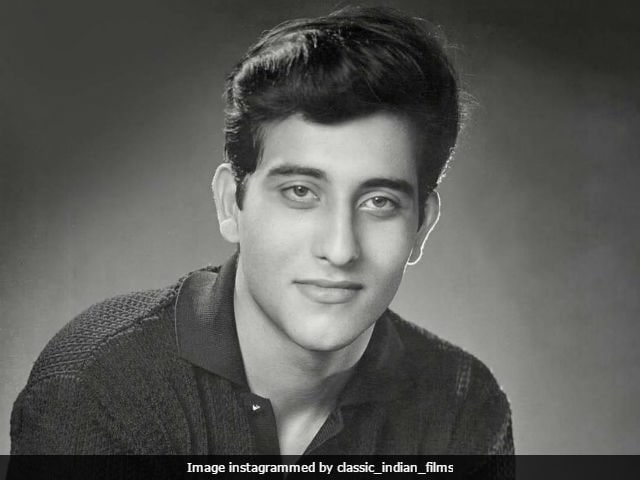 New Delhi: Actor and politician Vinod Khanna, who died at the age of 70, has been bid a fond farewell on social media by his colleagues and fans. Mr Khanna was taken to a hospital in Girgaon on March 31, ostensibly for dehydration. A photo of him looking shockingly frail in his hospital room went viral soon after, prompting speculation that Mr Khanna's illness was more severe. The hospital revealed today that Mr Khanna died of bladder cancer. Vinod Khanna is being mourned and remembered with respect - Twitter is flooded with messages of grief. Among those who posted early tributes to Mr Khanna was his Amar Akbar Anthony and Chandni co-star Rishi Kapoor and Hema Malini, who appeared with Mr Khanna in films like The Burning Train. Tamil superstar Rajinikanth posted a tweet for his "dear friend."

Will miss you Amar. RIP. pic.twitter.com/WC0zt71R4J

My dear friend Vinod Khanna... will miss you, RIP. My heartfelt condolences to the family.

Sanjay Dutt, son of actor Sunil Dutt, who has co-starred with Vinod Khanna in films like Khoon Ka Karza and Zameen, said: "It is saddening to hear of the demise of Vinod Khanna ji. I have watched him as a child and throughout my life was always fascinated by his style and charisma. He was always a thorough gentleman. A big loss to the fraternity. He is and always will be family to the Dutts. May his soul rest in peace. My deepest condolences to Kavita Bhabhi, Akshay, Rahul and Sakshi."

Heartfelt condolences on. the passing away of Shri Vinod Khanna, a highly talented and acclaimed actor & MP
# PresidentMukherjee

Will always remember Vinod Khanna as a popular actor, dedicated leader & a wonderful human. Pained by his demise. My condolences.

Shri Vinod Khanna had an illustrious career in films and politics. He carved a special place in the hearts of millions of Indians. 1/2

With the demise of Vinod Khannaji the people of India have lost a fabulous actor and sensitive politician. May his soul rest in peace. 2/2

Vinod Khanna, truly "Mere Apne", one of my most admired and loved personalities, the supremely handsome & talented superstar is no more..1>2

Right from films to politics, Vinod Khanna & I sailed together and he leaves behind an entire generation & more of fans, admirers...2>3

..friends, well wishers & loved ones grieving after him. May his noble soul find solace in the land of the almighty. Love you, miss you..3>4

My prayers and heartfelt condolences to his loved ones and his family. Very sad day for all of us. May his soul rest in peace. Amen.

Those were the days my friend... We thought they'd never end... We would sing & dance forever & EVER !!! pic.twitter.com/nWMd9mveEB

His screen presence is unparalleled even today...his super star swag is what we grew up on....RIP #VinodKhanna ...thoughts and prayers....

RiP Vinod Khanna ji. As a mark of respect to the legendry actor, premieres of Baahubali2 in Mumbai are cancelled.

Sad to learn about the passing away of #VinodKhanna Sir,one of the most charismatic actors...truly end of an era.Condolences to the family

Deeply saddened on Vinod Khannaji passing away. Our condolences to the family & prayers that his soul rests in eternal peace.

Very sad to hear about Vinod Khannaji. A decent man and a star till the very end. My condolences to his family.

My heartfelt condolences to the whole Khanna family... He will live on through his legacy & in our hearts... #VinodKhanna you will be missed pic.twitter.com/O9IqvJn0qL

#VinodKhanna ji had a magnetic charm & persona. Both on & off screen. He was kind, affectionate & helpful. Loved his panther like walk. pic.twitter.com/q01Hmqxbdp

Will remember #VinodKhanna ji for his larger than life performances & his graciousness. There r very few people like him. Will miss u Sir.

RIP Vinod Khanna. It's a sad sad day..Condolences to each member of the family

They don't make them like that anymore. RIP Vinod Sir. pic.twitter.com/u7JdCNXDgE

Heartbroken to hear about the passing of Mr. Vinod Khanna. Deepest condolences to Akshaye, Rahul and the rest of the family.

Even in brief greetings he never failed 2touch ur heart. Admired n looked up to him since I ws a kid. True legend. RIP Vinod khanna

A huge loss to the film industry. One of the nicest and most charming gentlemen ive had the pleasure of working with. #VinodKhanna sir, RIP.

He will live on forever in all of our hearts as a true hero ... #VinodKhanna

#Vinodkhanna will always remain the coolest and most good looking actor to grace the Indian screens.The industry has lost a legend today.

Sad to hear about #VinodKhanna sir ! May he rest in peace

I will never forget the warmest hugs, the gentlest smiles and our conversations...Your light will always shine on us... #RIPVinodKhanna

Thank you for enriching my growing up years with wonderful cinematic memories. #vinodkhannaji you will be missed sir. #RIPpic.twitter.com/Jl6zIwtZxC

RIP #VinodKhanna sir. You were the fantasy of most women in the northern India through the 1980s. You shall be missed by one and all

Extremely saddened by the news of my darling uncle Vinod Khanna ji passing away. Our condolences to his family! May his soul RIP miss you

Feeling saddened on the loss of my all time favourite hero #VinodKhanna Ji.
More power to his Family #RIPpic.twitter.com/VyNNSay5Xb

Saddened by the news of Vinod Khanna ji's demise. He was a class apart & a beautiful person. RIP.

Filmmakers Mahesh Bhatt and Sudhir Mishra spoke to NDTV after the actor's death. Mr Bhatt said, "I am poorer today with his passing away. He was tough, lion hearted and generous. He had the guts to risk his all." Mr Mishra said, "The whole memory of childhood is gone. For my generation, Mr Khanna was something else."

Vinod Khanna had a long and fabled career on screen. After starting out playing a villain in films like Mera Gaon Mera Desh, he starred as the leading man in acclaimed films such as Gulzaar's Achanak. He was also known for starring in films with other leading actors - with Amitabh Bachchan, Vinod Khanna made films like Amar Akbar Anthony, Hera Pheri and Muqaddar Ka Sikander; with Randhir Kapoor, he made Haath Ki Safai and Aakhri Daku. He also co-starred with Shashi Kapoor, Jeetendra and Dharmendra.

Promoted
Listen to the latest songs, only on JioSaavn.com
Vinod Khanna interrupted his career in the Eighties, spending five years as a follower of spiritual guru Osho. He returned to films with 1987's Insaaf and later joined the BJP, winning elections from Gurdaspur in Punjab, from where he was the sitting Member of Parliament when he died. He continued to make movies, appearing in Salman Khan's Dabangg films and Shah Rukh Khan's 2015 release Dilwale.

Vinod Khanna is survived by his second wife Kavita and four children, of whom the eldest two, Rahul and Akshaye, are actors.