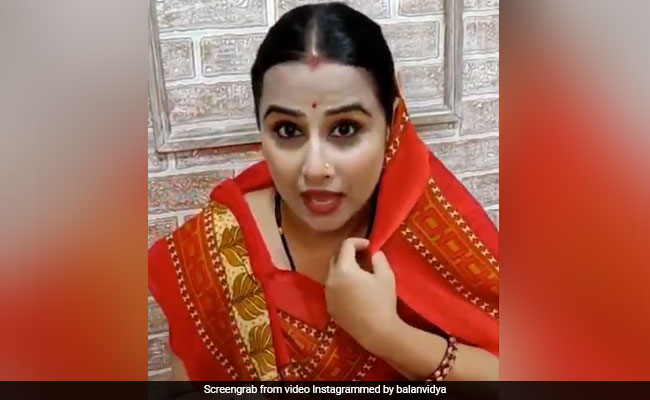 Vidya Balan in a still from the video. (Image courtesy: balanvidya)

Vidya Balan's latest Instagram post is an example of perfect "time pass." The 40-year-old actress shared a lip-sync video, in which she can be seen mimicking a pandit speaking about the qualities of a woman as "devi" before and after marriage. The video is making the Internet ROFL, especially Sonakshi Sinha, who couldn't stop laughing in the comments section. In the video, in which Vidya Balan can be seen sporting traditional look, she can be heard saying: "Shashtro ke anusaar, har kunwari ladki mai nau deviyo ka vaas hota hai. Lekin, lekin, shaadi ke baad kaun si devi active hogi, ye pati ke karmo par nirbhar karta hai." Going by Vidya Balan's caption, it seems the actress is kind of referring to the music video app Tik Tok, where you can create and sharing short lip-sync videos.

Sharing the video, Vidya wrote: "Some tak-tuk time pass." Check it out:

Vidya Balan's fans on Instagram flooded her post with comments such as "Which devi are you?" and "Vidya... Aap devi ka 10th avtar hain." Many other users just left comments praising Vidya Balan's traditional look.

Mission Mangal, directed by Jagan Shakti and produced by Fox Star Studios, is based on Indian Space Research Organization (ISRO) scientists, who made the Mars Orbiter Mission (MOM) possible. The film is slated to release on August 15. It will clash with John Abraham's Batla House at the box office, which is releasing on the same date.