"Vidya Balan's inspirational video is changing the opinion of people," tweeted a fan 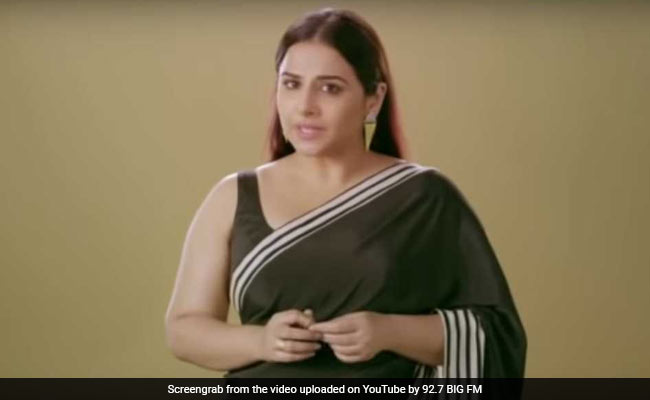 Vidya Balan in a still from the video. (Image courtesy: YouTube)

Vidya Balan, who recently shut-up body shamers like a boss with her empowering video Let's Talk About Body Shaming, occupied spot on Twitter's list of trends on Wednesday and for all the right reasons. The 40-year-old actress shared the video on social media a few days ago and it is trending incessantly. Vidya Balan, who has often found herself at the receiving end of brutal criticism for her body, talks about her ordeal with body shaming in the video. Just like us, the Internet also loved Vidya's take on body shaming. The actress' ideas resonated with several fans, who praised her for the video. Take a look at some of the tweets here:

Don't judge anyone with the shape of their body nothing's wrong with anyone's body, but with the minds of the people who body shame. Please watch this inspirational video by Vidya Balan. #DhunBadalKeTohDekhohttps://t.co/DiuS5hcxsrpic.twitter.com/PPk8j2EMjh

"We see this happening every day but choose to ignore, not anymore. Let's stand for ourselves," wrote a fan.

Kisi ke self-confidence ke saath mazak kyun karna? #DhunBadalKeTohDekho We see this happening every day but choose to ignore, not anymore. Let's stand for ourselves. https://t.co/jky5gaKmHI

Such a nice and heart touching video #VidyaBalan#DhunBadalKeTohDekho

Many fans thought Vidya Balan's "inspirational video is changing the opinion of people" and we couldn't agree more.

Inspirational video by @vidya_balan is changing the opinion of people for body shaming .This is a great step forward... i am glad that somebody is working on it #DhunBadalKeTohDekhopic.twitter.com/Xq1srYyvkL

Here are some more tweets shared by fans on Twitter:

To everyone who hasn't learnt from their mistakes, please watch this video. Vidya Balan's perspective on body shaming is such an eye-opener.#DhunBadalKeTohDekhohttps://t.co/1ANpeiQr4Npic.twitter.com/1dDl7TCfo4

Vidya Balan is doing such a great job for giving confidence to people like us, who thinks that they are the worst... Thank you Vidya ji... #DhunBadalKeTohDekhohttps://t.co/v17nHpfO3fpic.twitter.com/pimJyxHaZZ

This deserves to be shared, posted, on each and every platform of digital media. This video speaks volume. Thank you @vidya_balan for speaking up. #DhunBadalKeTohDekhohttps://t.co/V8wpiHVzuS

Vidya Balan, who has been body-shamed several times on social media and at public events, used the music of Bollywood songs in her video and she touched upon an array of topics like beauty standards for women, body positivity and more. Take a look at the video here:

Vidya Balan shared the video on social media a few days back and she wrote: "Most of us are potential victims of body shaming - the widespread phenomenon of receiving cruel feedback when our bodies don't meet the unrealistic beauty standards of our time. Here's my take on body shaming."

Most of us are potential victims of 'body shaming' - the widespread phenomenon of receiving cruel feedback when our bodies don't meet the unrealistic beauty standards of our time. Here's my take on Body Shaming. Tune in to '#MuthootBlue #DhunBadalKeTohDekho with Vidya Balan presented by Muthoot Fincorp', from Mon-Fri 7-9pm, only on 92.7 BIG FM Muthoot India VWoman #KhudSeKhudKaRishta @bigfmindia

Vidya Balan, who won a National Award for her role in The Dirty Picture in 2011, was last seen in NTR: Kathanayakudu, in which she played the role of Basavatarakam. Her last Bollywood project was the 2017 film Tumhari Sulu.