We Are Totally Stealing Vidya Balan's Explanation Of "Flat" Stomachs

Vidya Balan posted a video of herself on Instagram 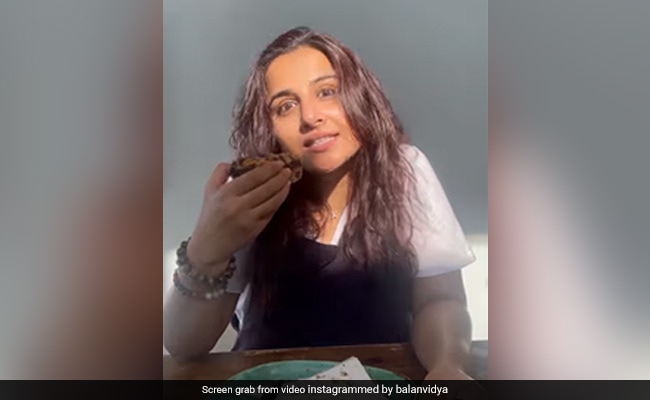 Vidya Balan in a still from the video. (courtesy: balanvidya)

If you are wondering what Vidya Balan is up to these days, you'd be glad to take a sneak peek into her social media activity. Vidya Balan has dropped a video where she is seen lip-syncing to a pre-recorded audio. And, it has left us in splits. In the video, Vidya Balan is sitting in front of a plate of cake. As she picks it up to eat it, the audio begins. We hear a voice asking, “Is your stomach flat?” To this, Vidya Balan answers, “Yes it is. but the “L” is silent.”  She wrote in the caption, “To anyone asking if…” Actress Dia Mirza commented on the post with laughing emojis.

Vidya Balan has an outstanding repertoire of work. She is an entertainer in the truest sense of the word. Her social media activity is proof. She keeps dropping interesting videos featuring herself. And, Vidya Balan doesn't shy away from showing off her antics on her Instafam. When she tried to shoot a trending Reels video, she made sure that it was relatable and fun to watch. In the video, she is seen standing outdoors under a tree. As the audio begins, she tries to drop down to the ground in a sultry way. However, when Vidya Balan tries to get up, she acts as if she has hurt her back. The accompanying audio track makes it funnier. Her caption read, “Every trend is not for you.” Once again, Dia Mirza left ROFL emojis. Actress Ileana D'Cruz wrote, “Bahahahahahaha you hilarious but we all know that you can totally smash any trend.”

Apart from being an entertainer, Vidya Balan also loves to indulge in fashion. But she has her own eccentric ways to go about the fashion business. And her captions are as stunning as her looks. She posted one of her saree videos and wrote, “My brief to my stylists? Quite simple…Make it a saree. But make it stunning.”

Vidya Balan will next be seen in Neeyat.