Victoria & Abdul is elegant and warm and entirely misleading. Its charming inoffensiveness is at the root of its insidious politics 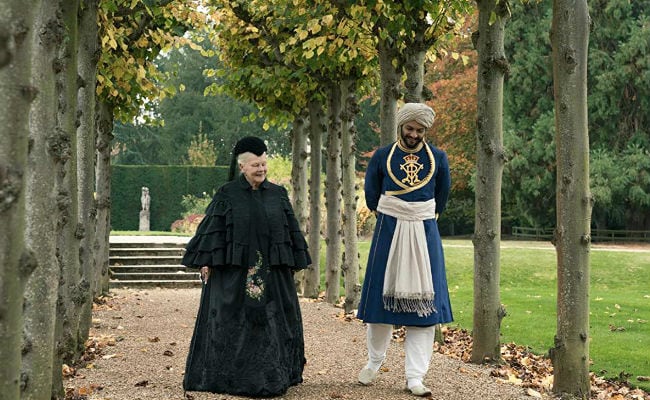 A still from Victoria & Abdul.

Washington: The British Empire in South Asia remains an enduring source of conflicting narratives even 70 years after its collapse. In recent years, Brexit supporters have sought to reclaim their island's lost greatness while India's nationalists have disposed of imperial statues into distant parks and basements left unseen.

In Western popular culture, the age of British high colonialism, wrapped in the regal pomp and circumstance of Windsor courtesies, still manages to evoke wanderlust fantasies in khaki and white, tented tiger hunts and bejeweled glamour. Oscar-nominated director Stephen Frears' new film Victoria & Abdul is only the latest offering in a long line of Hollywood's imperial confections. It stars the delightful Dame Judi Dench as Queen Victoria in an effervescent, charming and sweet portrait of an unusual friendship between the monarch and her beloved Indian servant, Abdul.

As this cheeky colonial comedy opens, the widowed Queen Victoria is sluggishly pushing through her last decade. She is cranky and bored, but her eyes and appetite perk up when she meets her new special delivery, a handsome Indian Muslim subject turned servant named Abdul Karim. He's been handpicked and shipped from Agra to serve in Indian regalia at the Queen's upcoming jubilee. The film shows how the weary queen quickly comes to admire the strapping Abdul and wakes to rediscover her inner light and joy. Her curiosity aroused, she learns Urdu from her beloved munshi (teacher) and listens attentively as Abdul describes the romantic drama of the Taj Mahal.

Queen Victoria also happens to be the only racially woke one around here and has no patience for her staff's blatant racism-based hatred of her beloved brown Abdul. Characters storm off in snide English tantrums screaming of Victoria's "Munshi Mania!" Against her court's insistence, she whisks Abdul away to Florence, joining him in candlelit dances and contagious laughter. Dench can elevate the shallowest of moments into Shakespearean pathos and without her presence, this would be a travesty of the highest order. The film is elegant and warm and entirely misleading. Its charming inoffensiveness is at the root of its insidious politics.

The facts of empire are a stubborn thing.

It's true that the late 19th century was an extraordinary period of territorial expansion, political advancement and intellectual growth for Britain. The Victorian age, with the voracious queen at its helm, was the age of High Empire. Along with her husband Albert, Victoria had weathered the violent Indian uprising of 1857, deposed the Mughal monarch whose dynasty had reigned in Delhi for centuries and brutally crushed the remains of the resistance. Victoria's empire was born in blood, and the ensuing shock waves transformed Indian borders, society and politics forever. In the year of Victoria's jubilee celebrations in Britain that heralded the arrival of Abdul from Agra, a brutal famine across India led to more than 5 million deaths. Protests against the mismanagement and neglect by British administrators inspired a new generation of anti-colonialists who would eventually form Mohandas Karamchand Gandhi's Indian Congress Party.

Victoria & Abdul, is keenly aware of that history and yet intentionally chooses to keep its audience entertained on the lush grounds of Victoria's palaces, parlors and gardens. We see the empire as she did: a confection, a distant dream, a realm of personal prizes. For a film about the legacy of a global empire, that is intentionally and unforgivably narrow. Abdul's world is shown through hazy and cliched scenes of exotic marketplaces and in the distant tourist views of a glimmering Taj Mahal.

There is no real conversation or parity between Victoria and Abdul. In the screenplay, his character is simply there to serve as her Manic Pixie Dream Brownie. There are several scenes of him simply collapsing to the ground to kiss her feet. Abdul joins a long line of South Asian male characters delegated to prop status in Hollywood features. Once they were silent servants in black-and-white adventure films a la Gunga Din, then accented comedic sidekicks or exotic freak shows, and in recent years, terrorist villains in newsy thrillers. In Victoria & Abdul, he is an object of exotic eroticism. It is a kind of advancement. Abdul is dashingly handsome, bejeweled and dressed in finery inviting the audience's ogling. But it's this objectification that creates such an imbalance in what is advertised on posters as the portrait of a couple, a duo, a religious duet and a cultural conversation.

Victoria and Abdul's was a real friendship that brought crisis to the court. Her successor would later burn all evidence of their relationship and correspondence. Despite the film's saccharine efforts at highlighting the unusual historical connection, by keeping the focus on court gossip it misses the political structure that allowed Victoria to control Abdul at her whims. (Imagine a film about slavery in America that shows the ways a whimsical, poetic slave could enliven massuh's melancholia without addressing the structural reason for said condition.) And yet, ads for the film are seemingly everywhere, and it is even one of the sponsors of the recent Keeping Up With the Kardashians marathon in which this writer may have indulged. This kind of shallow Raj revisionism is possible because of how little we've confronted the enduring and painful legacy of the British Empire.

Since the film premiered at the Venice Film Festival, the filmmakers and marketers have sought to underscore the message of racial and religious reconciliation against the current strain of anti-Muslim, anti-immigrant bigotry across the West. Discussing the message of tolerance, director Stephen Frears sarcastically joked to the Hollywood Reporter, "I thought to myself: 'What film would Donald Trump most like to see?' "

But in the service of that mission, a less glossy portrayal of empire would actually have more of the intended effect. The stakes and mistakes would be clear. The drama of Victoria's demise and Abdul's eventual banishment by her successor is more poignant than this comedic romp of courtly manners. As the film opens, the screen reads "Based on a true events . . . mostly." By winking at the audience with its self-awareness, the film seeks to soothe cranky viewers bearing torches of political correctness and historical outrage with its charm. Beyond the audience, that is mostly a disservice to the film's subjects and their enduring legacy.

- Qureshi, a writer and radio journalist, is working on a memoir about contemporary Muslim identity. From 2008 to 2015, he was a producer and editor with NPR's All Things Considered.

Promoted
Listen to the latest songs, only on JioSaavn.com
(c) 2017, Special to The Washington Post