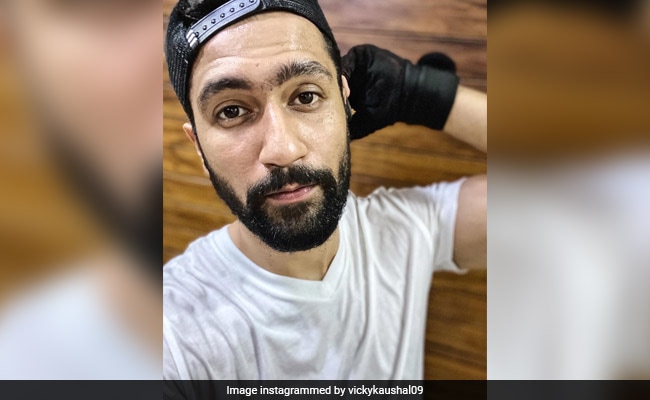 Vicky Kaushal, who has been sharing glimpses of his workout routine, did something similar on Wednesday. However, this time, he shared his photo with an ROFL caption. Wondering what he wrote? Well, the actor shared a picture of himself from his fitness diaries and wrote that although he had an intense workout session, he "regrets wasting time" by clicking a selfie in between the sets. In the picture, Vicky Kaushal can be seen sporting a white t-shirt, a black cap and black gym gloves. "Sweat > Regret...Although regret wasting time in between sets for a selfie. Adios!" the actor captioned the post. Take a look:

Sweat > Regret. . . Although regret wasting time in between sets for a . Adios!

In one of his previous posts, Vicky Kaushal shared a throwback picture of himself from a gym to express how much he has been "missing" gym machines. Here's the post we are talking about:

Meanwhile, check out a few more workout posts that Vicky Kaushal has shared on social media:

Vicky Kaushal made his debut in Bollywood with the 2015 film Masaan. Since then, he has featured in several hits such as Raazi, Lust Stories, Sanju and Manmarziyaan. In 2019, he starred in the Aditya Dhar's Uri: The Surgical Strike, for which he even won the National Film Award for the Best Actor. Vicky Kaushal's upcoming films include Karan Johar's period drama Takht, Sardar Udham Singh and Field Marshal Sam Manekshaw's biopic. He will star alongside Raazi co-star Alia Bhatt, Kareena Kapoor, Bhoot Part One: The Haunted Ship co-star Bhumi Pednekar, Anil Kapoor and Ranveer Singh in the Karan Johar-directed film.